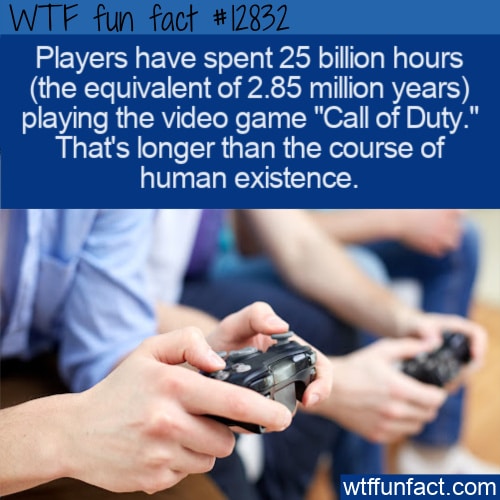 Millions of people have answered the Call of Duty, religiously okaying the first-person shooter video game from Activision over the years.

In fact, every year, Call of Duty players collectively log 475,000 years of gameplay. If you add that up over the course of just six years, it has cost players a combined 2.85 million man-years. That’s more than 14 times longer than humanity has existed!

Answering the call of duty

According to Gamerrant: “Call of Duty, which began all the way back in 2003, has 16 console games and one mobile game over those 17 years. Since these titles have been available across many platforms and are incredibly replayable, many individuals have put in an amazing number of hours just trying to trick out their arsenal, fulfill other challenges to get the best gear, or just play with friends. With Call of Duty Modern Warfare (2019) smashing sales records too and player loyalty at an all-time high, those hours have really added up over the years.”

And there are more impressive stats :

“The oldest human remains have been carbon-dated at about 200,000 years old, so that makes the collective years and hours spent playing Call of Duty an absolutely mind-blowing number. Considering that there are currently 7.8 billion humans on earth right now, that’s about 3.2 hours per human. With more than 300 million copies of Call of Duty sold worldwide over the last 17 years, with many of the games breaking records (like Black Ops 4, Modern Warfare, and more), that’s about 80 hours per copy.”

Apparently, some consider Call of Duty not a violent hobby but a way of connecting people. Gamerrant called it “a wonderful tool to stay connected while having some fun. Also, with this many gamers and the devs working together, they can help generate donations for natural disasters, like the Australian wildfires. All told, these amazing numbers are both a boon for Call of Duty and its devs as well as fans of the series worldwide.”

Source: “Humankind has now spent more time playing Call of Duty than it has existed on Earth” — Washington Post