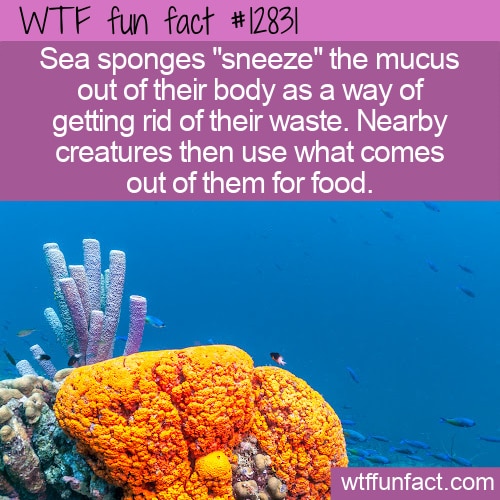 It turns out sea sponges get full of mucus and other gunk (which we’re sure there’s a technical name for). And to get rid of this waste, they perform one of the most ancient ways to get rid of waste – that is, sea sponges sneeze to squeeze out the gunk,

Not exactly appetizing, but they aren’t really built in a way to do anything more complex.

According to ScienceDaily (cited below), “A group of researchers found that sponges, one of the oldest multicellular organisms in existence, ‘sneeze’ to unclog their internal filter systems that they use to capture nutrients from the water.”

That’s not a super smooth move, but nearby creatures don’t mind – they eat the waste.

But this sneeze is nothing like a human sneeze – in fact, it takes about half an hour to complete.

“Our data suggest that sneezing is an adaptation that sponges evolved to keep themselves clean,” marine biologist Jasper de Goeij told the publication.

Blowing out the waste

Even though our sneezes aren’t the same, they do serve the same purpose – trying to get waste out of our bodies.

Here’s how it works for sponges:

“Sponges gather food for themselves by filtering out organic matter from the water. They draw in and eject water from different openings, and sometimes the sponges will suck in particles that are too big. ‘These are sponges; they can’t just walk to somewhere else when the water around them gets too dirty for them to handle,” said de Goeij.”

When sponge tissues contract, they push waste-containing mucus into the water surrounding them.

What the sponges “sneeze” out doesn’t simply all sink to the bottom of the ocean floor. Apparently, that mucus is a prime snack food for other creatures.

“We also observed fish and other animals feeding off of the sponge mucus as food,” says Niklas Kornder, a doctoral researcher in de Goeij’s research group said. “Some organic matter exists in the water surrounding the coral reef, but most of it is not concentrated enough for other animals to eat. Sponges transform this material into eatable mucus.”

While marine biologists believe most sponges sneeze, they’ve only witnessed it in the Caribbean tube sponge (Aplysina archeri) and an Indo-Pacific species of the genus Chelonaplysilla.

While the underwater snot-eating isn’t the most appetizing thing to think about, it does raise some questions for the researchers:

“In the videos, you can see that the mucus moves along defined paths on the surface of the sponge before accumulating. I have some hypotheses, but more analysis is needed to find out what is happening,” says Kornder. – WTF fun facts