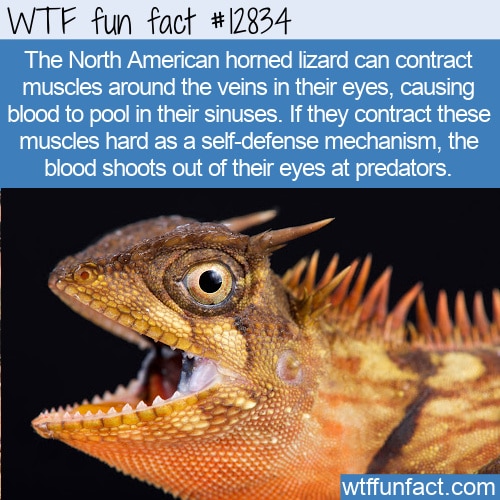 Have you ever seen a horned lizard shooting blood from its eyes? We’d rather not, but there’s no denying it’s a thing they’re able to do.

These lizards have blood-filled sinuses in the eye sockets that they can cause to swell and rupture in self-defense. And, to be fair, we’d probably back away from any animal that shoots blood at us out of anywhere, much less its eyes.

Who wants to mess with that?!

According to AskNature (cited below), “North American desert horned lizards have a wide range of predators within their habitat. One unusual defense mechanism involves the flooding of their ocular sinuses, tissues found below their eye, with blood. When a horned lizard feels threatened by a predator, its final defense response is to shoot blood from these flooded sinuses and out its eye sockets. As a result, the predator is often frightened and flees. The lizard also uses this mechanism to remove foreign particles from the surface of its eyes.”

How does lizard blood shooting work?

To be more precise, the horned lizard has major veins around its eyes that are surrounded by two muscles. They can make these muscles contract to cut off blood flow, trapping blood in the head and preventing it from moving down to the heart.

Eventually, this blood fills their ocular sinuses. And if they continue to contract the muscles, they can create enough pressure to make the blood flow (or spew) right out of their eyes. This process is called auto-hemorrhaging.

While it sounds like it might be the last gasp of a terrified creature, the horned lizard can actually shoot blood this way multiple times in a short period. And we don’t quite understand precisely how they so rapidly recover from this blood loss – only that they do. – WTF fun facts

Source: “Blood-filled sinuses within the eye sockets of horned lizards squirt blood in self-defense by swelling and rupturing” — AskNature