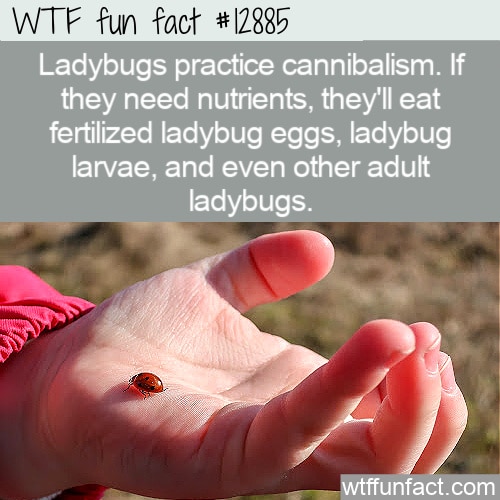 Do you remember being told as a kid that having a ladybug land of you is good luck? Well, that might be the case for humans, but in the ladybug world, these creatures have to watch their backs. Ladybugs have some interesting behaviors – like cannibalism.

Yes, ladybugs (also called ladybirds – another thing we didn’t know) will eat their own kind. But not just for fun – they have to be in the right situation. Still, if you check out ladybug habitats, you can find pieces of half-eaten bugs all over the place.

According to The Laidback Gardener (cited below): “Some species lay a mixture of fertile and infertile eggs. When the larva, which does not resemble the adult ladybug at all, but looks vaguely like a small alligator, is born and if it finds no other prey nearby (aphids, scale insects, mites, whiteflies, etc.), it will first eat an infertile egg to gain strength. Then, if the other larvae don’t disperse rapidly, it will eat them too. Even adults will readily eat larvae or even other adults when they have the opportunity.”

Other interesting facts about ladybugs

You may have also noticed that ladybugs smell pretty bad. It’s definitely the case when you squish them (which isn’t advisable, though they can infest houses – especially windowsills – in the summer). They also emit an odor when they’re just “disturbed.”

To top it off, humans are especially sensitive to the chemical compounds emitted by ladybugs, so they’re especially stinky to us – even when they emit low levels of their odors.

If you happen to have a ladybug invasion, yellow ladybugs are safer to pester than orange ones. Orange ladybugs are the stinkiest of all.  – WTF fun facts