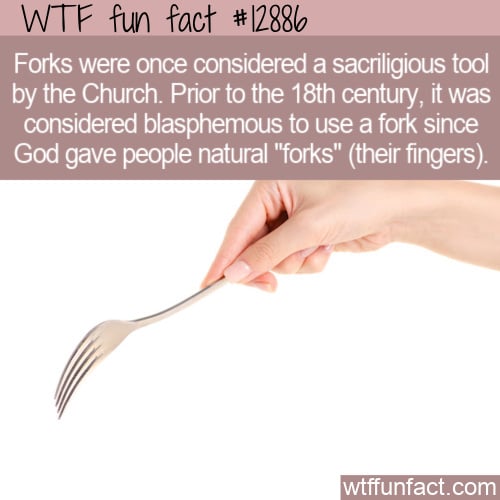 Who knew a fork could be seen as offensive (unless you’re using it to poke someone)? But it turns out that while forks are ancient tools, using forks used to be seen as sacrilegious by the Church.

Forks have been around for millennia, but they weren’t used as dining utensils until the Middle Ages. Then, only wealthy families owned such tools.

For much of human history, people have eaten with their fingers. Depending on the time period and part of the world you were in, it was appropriate to eat with all five fingers (spoons existed and were totally acceptable for soup lovers). Later on, it was seen as polite to eat with three fingers.

Touching your food was touching God’s creation (they didn’t have Twinkies back then, which are most decidedly not God’s creation). By using a technically unnecessary utensil, it was seen as blasphemous not to touch the food you were about to ingest.

Smithsonian Magazine (cited below) found old references to the inappropriateness of forks in the Middle Ages. For example:

“In 1004, the Greek niece of the Byzantine emperor used a golden fork at her wedding feast in Venice, where she married the doge’s son. At the time most Europeans still ate with their fingers and knives, so the Greek bride’s newfangled implement was seen as sinfully decadent by local clergy. ‘God in his wisdom has provided man with natural forks—his fingers,” one of the disdainful Venetians said. “Therefore it is an insult to him to substitute artificial metal forks for them when eating.’ When the bride died of the plague a few years later, Saint Peter Damian opined that it was God’s punishment for her hateful vanity.”

From blasphemous to ridiculous

Eventually, forks became less of a religious matter and simply socially unacceptable. Royalty and nobility – particularly in Italy – often had forks. but their use of the utensils was often used to mock them.

At this time, people were still using two-pronged forks. It would take at least a hundred more years for the third and fourth prongs to be added.

It wasn’t until the early 18th century that forks became acceptable and available in England (and a few decades after that in America).

As one 1887 book of manners noted, “The fork has now become the favorite and fashionable utensil for conveying food to the mouth. First it crowded out the knife, and now in its pride it has invaded the domain of the once powerful spoon. The spoon is now pretty well subdued also, and the fork, insolent and triumphant, has become a sumptuary tyrant. The true devotee of fashion does not dare to use a spoon except to stir his tea or to eat his soup with, and meekly eats his ice-cream with a fork and pretends to like it.”

Who knew forks had such a long and sordid history?! – WTF fun facts

Source: “A History of Western Eating Utensils, From the Scandalous Fork to the Incredible Spork” — Smithsonian Magazine