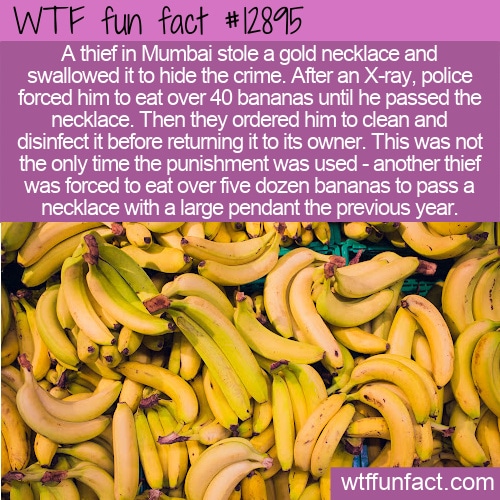 Bananas are very nutritious, and they can often help with constipation. But we’ve never seen them employed as a laxative punishment.

The thief and the bananas

Indian police caught a thief who had allegedly stolen a gold chain from a woman on the street in Mumbai. In order to conceal any crime, the thief decided to swallow the gold chain.

Of course, we now have ways of checking to see if there’s a gold chain in someone’s stomach, so police had his stomach X-rayed at the hospital to reveal that the gold chain was indeed inside him. An enema was administered but yielded no results.

And THEN came the uncomfortable part.

Rather than let nature take its course, the police wanted to retrieve the chain more quickly. So they force-fed the man over 40 bananas.

Bananas are one of the best foods to help with digestion since the carbohydrates they contain are easily broken down by the body. And if someone’s not feeling well (say, after swallowing a necklace), bananas are a gentle way of easing stomach pain. Of course, the point here was to use them as a laxative.

According to The Guardian (cited below), “Doctors suggested performing an operation, but police officers decided it would be too expensive and opted instead for the bananas.”

Mandatory surgery seems pretty darn drastic! So in this case the bananas were the less extreme option.

It’s unclear if the police used a technique other than simply mandating the man eat the bananas behind bars. A senior inspector with Mumbai police named Shankar Dhanavade said “He was fed more than 40 bananas throughout the day,” so that’s all we know.

The 25-year-old man eventually passed the chain – and we’re happy not to have the gruesome details of that part. What we do know is that the police made the man wash and disinfect the chain before handing it over.

The Guardian noted that “According to reports, it was not the first time Mumbai police had used this technique in order to recover a stolen item. In July last year, a chain was retrieved after a thief was made to eat two-dozen bananas and drink several litres of milk laced with laxatives, the Hindustan Times reported. In April, a thief was fed five-dozen bananas after swallowing a gold chain with a large pendant. The thief successfully excreted the loot, but the disgusted victim refused to touch it and instead took it to a jeweller in a plastic bag, the newspaper said.”

While we don’t advocate swallowing jewelry, we are now considering adding more bananas to our diet – in moderation, of course. – WTF fun facts