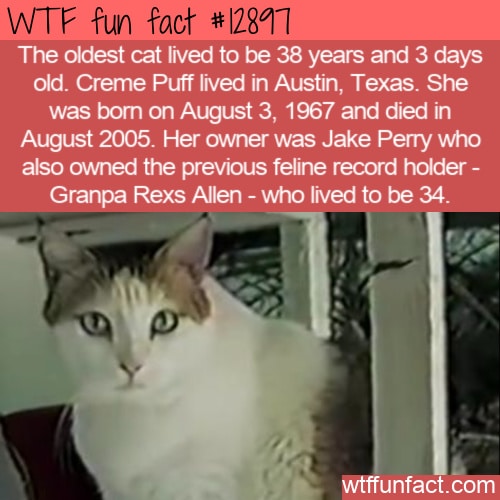 The world’s oldest cat was named Creme Puff – and the furry girl held on until age 38! It’s all been confirmed by the Guinness Book of World Records.

The story of Creme Puff

Creme Puff was owned by Jake Perry, who can safely be called a legendary cat owner (as well as a husband, father to humans, and plumber). He also adopted and found homes for hundreds of cats over his lifetime. But even more stunning is that Perry had been the owner of the previous record-holder for longest-lived cat before Creme Puff came along!

That cat, Granpa Rexs Allen was part sphynx and part Devon Rex mix, and he lived to age 34.

As you might imagine, Perry treated all of his cats as they so richly deserved. He built a theater in his garage that played nature documentaries for his cats to watch. He remembered and celebrated their birthdays every year (which, if you think about it, is A LOT of birthdays). Perry even had steps built all over the walls of his house so his cats would have things to climb on to stay engaged and stimulated.

Most importantly, he insisted that a loving relationship is the secret to cat longevity.

The diet Perry fed his cats is more questionable (or is it, since 1/3rd of the cats he’s owned have lived to be 30?). According to Atlas Obscura (cited below, with an excellent story on Perry) the cats’ daily diet had a few extra fixins’ on top of dry commercial cat food, including “a home-cooked breakfast of eggs, turkey bacon, broccoli, coffee with cream, and—every two days—about an eyedropper full of red wine to ‘circulate the arteries.'” (Note, caffeine and alcohol are not recommended for cats, nor is that much human food, so there much be some other secret – or it all goes together in some perfect feline-friendly way.)

Perry’s vet of choice is Bruce Hardesty, the owner of South Congress Veterinary Clinic in Austin, Texas. He’s seen 40 or 50 cats Perry has owned over the years. He believes at least 6 of Perry’s cats have reached age 30. – WTF fun facts