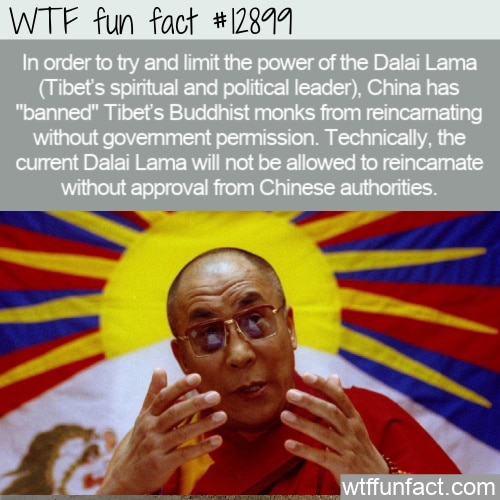 According to the Chinese government, any Tibetan monk needs government permission to reincarnate. The goal of this law, according to foreign policy and religious experts alike is to ensure that the Dalai Lama, Tibet’s spiritual leader, reincarnates inside of China’s borders so they can control his actions.

How did China ban reincarnation?

The current Dalai Lama is considered a threat to the Chinese government and its claim to Tibet. Despite the fact that the Chinese government is atheist by nature and its officials are not allowed to practice religion, they still want to regulate what they consider to be Tibetan “separatists” in the form of Buddhist monks. So they rubber-stamped legislation that tries to interfere with the spiritual leadership of the region.

In 2007, the legislation insisted that monks must have “recognition from the religious world and the temple” to reincarnate. “The selection of reincarnates must preserve national unity and solidarity of all ethnic groups, and the selection process cannot be influenced by any group or individual from outside the country,” it says.

That might sound non-controversial at first glance, but the Chinese government has published an official registry of “licensed Buddhas” (monks who have achieved the highest place in the Buddhist religion) along with their recognized temple and an ID card number. The goal is to use the database to recognize only certain monks who tow the party line. The Chinese government says that “fake living Buddhas” are the reason behind the action.

Tenzin Gyatso, the 14th Dalai Lama, and other Tibetan Buddhist monks pose a threat to the government with their desire for an autonomous Tibet, so they are not on the list.

The reaction to the reincarnation law

In 2011, the Dalai Lama called the country’s reincarnation laws “outrageous” and “disgraceful,” saying “The enforcement of various inappropriate methods for recognizing reincarnations to eradicate our unique Tibetan cultural traditions is doing damage that will be difficult to repair.”

The Dalai Lama currently can’t return to Tibet or China and monks have protested this for decades. According to the LA Times (cited below): “More than 140 people in Tibet and neighboring provinces have burned themselves to death since 2009 as a grim protest against Chinese rule; many have called for the Dalai Lama’s return as they went up in flames.”

The newspaper also noted that, in 2016, “Baima Chilin, deputy Communist Party chief of the region, said that the Dalai Lama was ‘no longer a religious leader’ after he left Tibet in 1959. ‘If the Dalai Lama wants to return to China, he must give up ‘Tibet independence,’ and must publicly acknowledge Tibet and Taiwan are inseparable parts of China and that the People’s Republic of China is the only legitimate government.'”

There’s no chance of that happening. — WTF fun facts

Source: “In China, the state decides who can come back from the dead” — LA Times