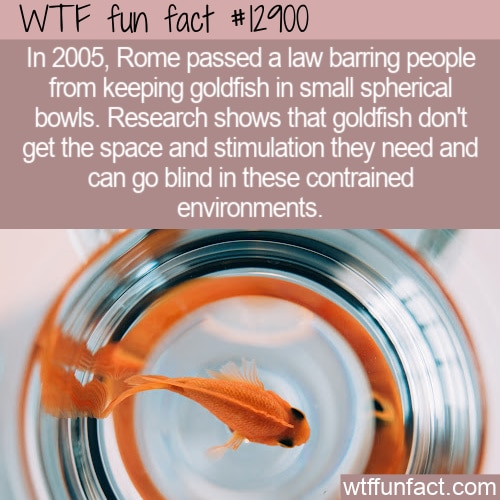 If you want to keep a goldfish in a simple round, glass bowl, don’t move to Rome. While many people believe the myth that goldfish have no memories, that’s simply not true. Research has shown that they do, in fact, remember things. And that’s part of the reason goldfish bowls are banned in Rome.

The bowls in which many people house their goldfish are quite small compared to the distance the fish like to swim when free. That makes many people believe that it’s cruel to keep them in such a small space with so little stimulation.

In 2005, Rome’s city councilors decided that it would ban spherical goldfish bowls for the health of the fish. It also banned giving away goldfish and other animals as prizes.

The fight for (all) animal rights

Rome also made it a law that all owners need to exercise their dogs daily, and that failure to walk your dog could mean a fine of $700.

It’s all part of a trend across the world to secure the well-being of pets, remind people of their responsibilities when they adopt an animal, and try to prevent pet owners from treating animals as simply property instead of living beings entitled to a certain quality of life.

While it’s unclear exactly what effect the law has had, it’s likely made some people second guess their behavior towards animals. — WTF fun facts