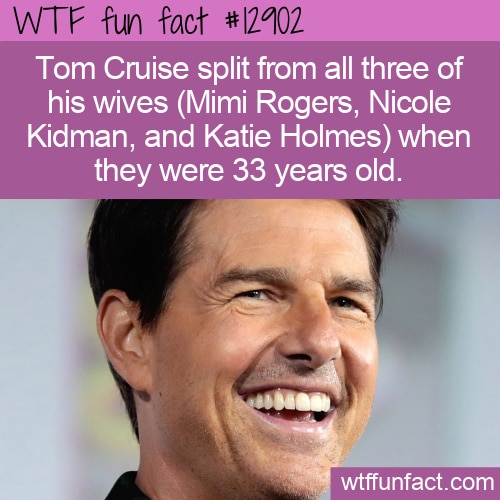 Tom Cruise has been married three times. And all of his marriages ended when his wife at the time was 33 years old. Coincidence? Maybe.

What is it about the number 33? Tom Cruise’s three wives – Mimi Rogers, Nicole Kidman, and Katie Holmes – were all 33 when their relationships with the actor ended. They were all 34 when the divorce was finalized.

Cruise is a Scientologist, and while there’s no proof that the “magic number” had anything to do with the breakup, 33 is a significant number for him. However, it’s not clear that Cruise was in control of any of the breakups – in fact, Katie Holmes was said to have left him.

As for the actual significance of the number 33, it’s hard to say. Scientologists are a notoriously secret group, so while some “sources” say the number is important, it’s unclear exactly how. We do know that L. Ron Hubbard, the founder of Scientology, built his first church in Phoenix, on the 33rd parallel.

Is it all a coincidence?

The average age of divorcing couples in the U.S. is around 30 years old, so it’s more than likely just a kooky coincidence. The number has some significance in other religions an in numerology, but it’s not clear if Cruise believes in any of that.

It’s also worth noting that while the news widely covered the fact that Cruise’s breakups all came when his wife at the time was 33, all of the divorces happened when they were 34. It’s just that Holmes announced the breakup when she was 33, people picked up on the number, and no one was sure how old Holmes would be when the divorce was finalized.

So maybe 34 is the unlucky number here. – WTF fun facts

Source: “All three of Tom Cruise’s marriages ended when wife was 33” — TODAY