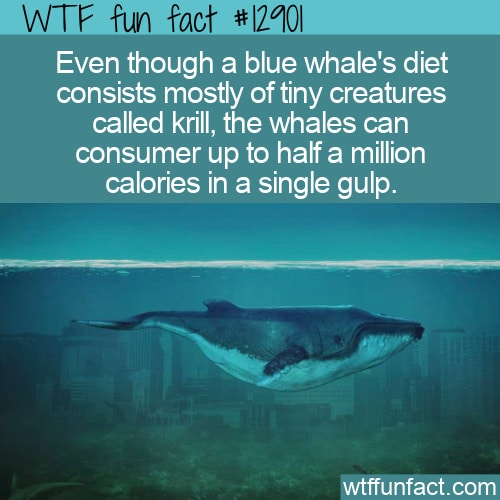 It’s no surprise that a blue whale’s calorie intake is massive – after all, they’re the largest creatures on Earth (and the largest animal to ever live). But half a MILLION calories is a lot to take in – especially in just one mouthful of food!

The majority of a blue whale’s diet consists of tiny shrimp-like creatures called krill (interestingly, one of the smallest ocean creatures). According to Smithsonian Magazine (cited below): “A foraging whale lunges into a swarm of these shrimp-like animals, accelerating to high speed with its mouth open at a right angle. Pushed back by the rush of water, its mouth expands and its tongue (itself the size of an elephant) inverts to create more room. The whale engulfs up to 110 tonnes of water and any krill within is filtered out and swallowed.”

Jeremy Goldbogen studies blue whales at the University of British Columbia. He tagged 265 of the massive creatures to log the amount of energy they expended while lunging to eat. His devices recorded information for 650 feeding lunges.

“The data-loggers recorded the whales’ position, their acceleration, and the noise and pressure of the surrounding water. The noise was important – by measuring the sound of water rushing past the animal, Goldbergen could work out how fast it was travelling.”

Blue whales can move up to 8 mph in less than a minute and 770 to 1900 calories just to work up the momentum to take that big gulp of ocean water. An average feeding dive takes about 10 minutes, and the whales take around 3 to 4 gulps in that time. But they consume from 6 to 240 times the amount of calories they expend.

If a blue whale expends so much energy simply diving for food, it makes sense that they would have to take in an enormous number of calories to make it worth the trouble. But it’s hard to believe just how many calories they can take in.

Smithsonian Magazine states: “If a big whale attacks a particularly dense swarm, it can swallow up to 500 kilograms of krill, eating 457,000 calories in a single monster mouthful and getting back almost 200 times the amount it burned in the attempt. A smaller whale lunging at a sparse collection of krill would only get around 8,000 calories, but that’s still 8 times more than what it burned. Even when Goldbogen accounted for the energy needed to dive in search of prey, the whales still regained 3 to 90 times as much energy as they spent.”

This makes it easier to think of all of the rest of our meals as relatively low-calorie, by comparison. – WTF fun facts

Source: “Blue whales can eat half a million calories in a single mouthful” — National Geographic