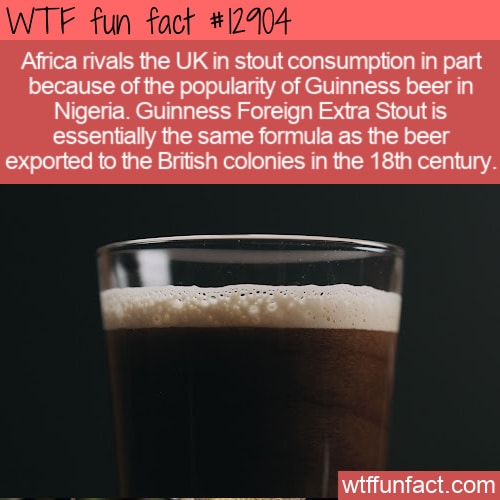 If you go to Lagos, Nigeria, you’re just as likely to hear about how to pour the perfect pint of Guinness beer as you are in Ireland. In Nigeria and throughout the African continent, Guinness is one of the most popular beers around.

According to Smithsonian Magazine (cited below): “The dark brew makes up about 45 percent of beer sold by Diageo, the company that owns Guinness, on the continent, and Diageo is one of four companies that split about 90 percent of the African beer market. Popularity varies from country to country, and Guinness is a particular favorite in Nigeria.”

And there’s definitely something special about it for fans in African since the continent (which is, admittedly, enormous and diverse) now rivals the UK in stout consumption.

“In 2007, Africa surpassed Ireland as the second largest market for Guinness worldwide, behind the United Kingdom, and sales have only climbed since then (by about 13 percent each year),” according to Smithsonian Magazine.

In 1803, Arthur Guinness II inherited the brewery from his father and began exporting the beer to England. But after that, the British colonies were the next obvious place to export the beer. First, Guinness’ “West Indies Porter” went to Barbados and Trinidad. Then, it became known as Guinness Foreign Extra Stout and arrived in Sierra Leone in 1827.

While the beer went to soldiers of the British Empire, breweries were eventually built on the continent itself in order to bottle beer for Africans. Even as colonies gained their freedom, the beer remained. And when Nigeria won its independence in 1960, Lagos (the capital) got the first long-term Guinness brewery outside of Ireland. Now, 13 breweries produce Guinness in Africa.

Smithsonian notes: “In his book Guinness: The 250 Year Quest for the Perfect Pint, historian Bill Yenne discussed the popularity of Guinness abroad with brewmaster Fergal Murray, who worked at the Guinness brewery in Nigeria in the 1980s. ‘I’ve talked to Nigerians who think of Guinness as their national beer,’ Murray recalled. ‘They wonder why Guinness is sold in Ireland. You can talk to Nigerians in Lagos who will tell you as many stories about their perfect pint as an Irishman will. They’ll tell about how they’ve had the perfect bottle of foreign extra stout at a particular bar on their way home from work.'”