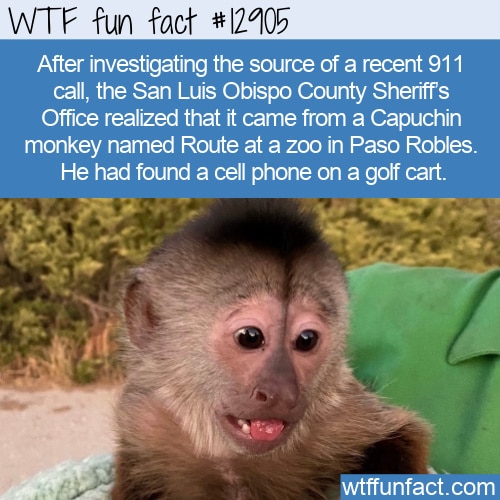 It’s illegal to make fake 911 calls, so the San Luis Obispo County Sheriff’s Office tried to track down the culprit of a recent dial-in. They also wanted to make sure no one need their help on the end of the suddenly disconnected call. The tracked the phone down to the “Zoo To You” near Paso Robles and deduced that it was likely a Capuchin monkey that made the call.

Finding the source of the call

Dispatchers tried to call and text back when the call first came in. Then they sent in the police, only to find that no human on the premesis had any idea what they were talking about.

The call came from a cell phone that was left in a golf cart used on the property.

They finally deduced that a Capuchin monkey named Route had apparently picked up the zoo’s cellphone, which was in a golf cart used to move about the property.

“Our Deputies have seen their fair share of “monkey business” in the County. But nothing quite like this.
It all started Saturday night when we received a 911 call that had disconnected. Dispatchers tried to call and text back but they received no response. So Deputies were sent to investigate.
The address took them to the offices of Zoo to You near Paso Robles. No one there had placed the call.
Was someone trying to make us look like a monkey’s uncle?
Then they all realized… it must have been Route the Capuchin monkey.
Apparently, Route had picked up the zoo’s cell phone… which was in the zoo’s golf cart… which is used to travel around the zoo’s 40 acre site.
We’re told Capuchin monkeys are very inquisitive and will grab anything and everything and just start pushing buttons.
And that’s what Route did… just so happened it was in the right combination of numbers to call us.
As you can tell from these photos, Route is a little embarrassed by the whole thing. But you can’t really blame her, after all monkey see, monkey do.”

You’ve no doubt heard of the infinite monkey theroem that posits that a monkey sitting at a typewriter for an infinite amount of time would eventually get around to typing out a full line of Shakespeare.

Abstract statistical metaphors aside, it turns out the a Capuchin with a cell phone and nothing else to do will eventually press 9-1-1-send. — WTF fun facts