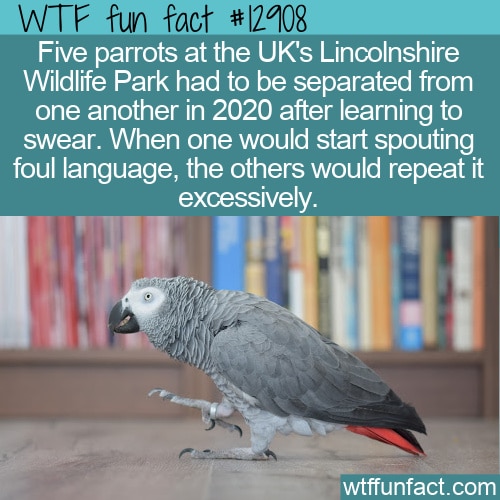 Five African grey parrots at the UK’s Lincolnshire Wildlife Park got separated by staff because they were perceived as having a “bad influence” on one another. Someone taught the parrots to swear. And there’s a reason they call repeating things “parroting.”

While no guests complained, the zoo took the proactive step of separating them in case any visiting children ever decided to parrot the parrots.

According to The Guardian (cited below), “The parrots – named Billy, Elsie, Eric, Jade and Tyson – joined Lincolnshire Wildlife Park’s colony of 200 grey parrots in August. But soon after, they started encouraging each other to swear.”

“We saw it very quickly – we are quite used to parrots swearing but we’ve never had five at the same time,” Steve Nichols, CEO of the wildlife park reportedly said. “Most parrots clam up outside, but for some reason these five relish it.”

No one got rid of the parrots – they were simply “distributed to different areas of the park so they do not ‘set each other off.'”

Guests weren’t put off at all by the parrots. In fact, as you might expect, they drew people into the facility. “People have come to us but they think it’s highly amusing, we haven’t had one complaint,” Nichols said, according to The Guardian. “When a parrot tells you to fuck off, it amuses people very highly. It’s brought a big smile to a really hard year.”

We know some humans who offer that service for free as well, but someone it just seems less rude coming from a parrot.

The paper also noted that “The park is also home to parrot Chico, who made headlines in September after learning to sing a range of pop songs, including Beyoncé’s If I Were a Boy.”

It sounds like quite an interesting place! — WTF fun facts

Source: “Swearing parrots separated after telling folk where to go” — The Guardian