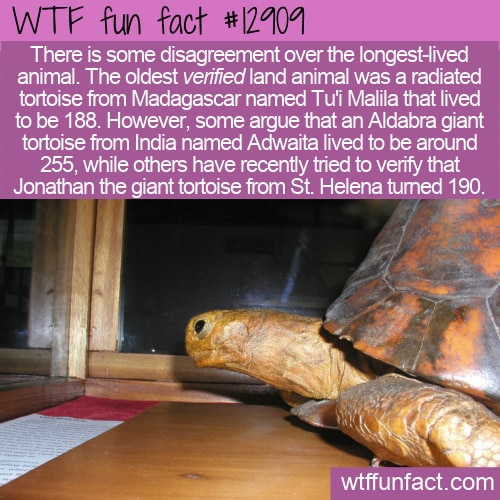 This is something that will make you appreciate how our modern world is still so, so young. The longest-lived creatures are older than any of us, and most were or are older than our desire or ability to record their age for posterity. That said, we do have records of the land animal that lived the longest that we can properly verify. Other animals may have lived longer, but we don’t have reliable ways to prove it.

The radiated tortoise – one of the longest-lived animals

When it comes to sea creatures, we’re even more clueless as to age, and we endanger them by trying to find out. But it’s a bit easier with land animals, especially tortoises since they don’t move very fast.

As far as things we can verify are concerned, a radiated tortoise from Madagascar named Tu’i Malila is the longest-lived land animal. And here’s another fun fact – all its life, Tu’i Malila was thought to be a male. Upon her death, a proper examination was conducted, and it was determined she was female. (Some tortoises obviously don’t have obvious sex characteristics.)

The story of Tu’i Malila

Tu’i Malila means “King” Malila in the Tongan language and records show that Captain James Cook gave her to the royal family of Tonga shortly after her birth in 1777. She stayed in the royal family’s care her whole life until her death in 1965.

The radiated tortoise (a classification that has nothing to do with radiation but rather the pattern on their shells) is now preserved and on display at the Tongan National Center on the island of Tongatapu.

However, there is some disagreement over what counts as the oldest living animal. Some argue that an Aldabra giant tortoise from India named Adwaita lived to be around 255.

This year (in January 2022) the keepers of a giant tortoise named Jonathan have convinced the Guinness Book of World Records that the animal from St. Helena turned 190.

Source: “The King of Tonga” — The Good Turtle Blog