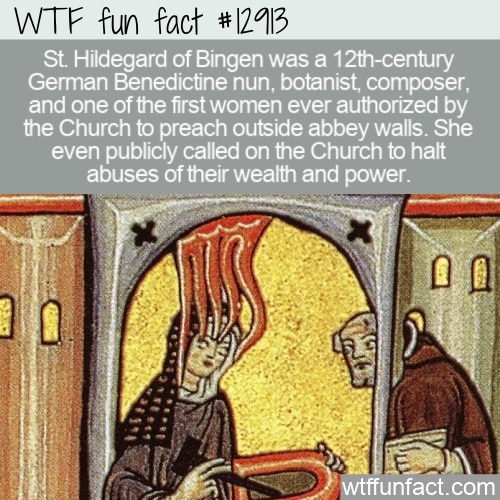 Who is Hildegard of Bingen?

The 12th-century abbess was given to the church by her noble family at age 8 and took her vows at age 15. She was an enclosed “anchorite,” which, according to Atlas Obscura (cited below) “were metaphorically “buried” in a small cell or structure attached to a monastery or church. They were often given food through grilles, and were allowed little or no communication with the outside world.”

She spent the next three decades learning about music, botany, health, and healing. It wasn’t until she was in her 40s that she was called by God to start writing things down, after which she became a prolific writer and composer.

Hildegard could have easily been seen as a heretic because she was an openly vocal critic of Church abuses of wealth and power who unapologetically insisted she had visions and received prophecies sent by God. But the Church believed her and needed her intellect.

Why is St. Hildegarde famous?

After Hildegard began writing, a monk friend of hers began translating her words into proper Latin, and in 1147 her work Scivas was given to Pope Eugenius III. He declared her work important to the church and later called on her to start preaching.

While the word “feminist” didn’t exist at the time, she did use her visions to empower herself and carve out a place for herself in the Church. And she could be highly critical of the institution as well, calling out their desire for power and prestige over piety. She believe Church corruption was destroying the faith.

Atlas Obscura notes that “Hildegard became an advisor and honest critic of Kings, Queens, Emperors, Popes and priests. Over 400 of her letters survive, and according to biographer Fiona Maddocks, they offer fascinating insight into the different ways she portrayed herself. To men, she was but a poor, frail woman, who was speaking what God had told her. In her correspondence with women, she was much more straightforward and honest, often dispensing practical advice from one of her many areas of expertise.” — WTF fun facts

Source: “The Medieval Prophetess Who Used Her Visions to Criticize the Church” — Atlas Obscura