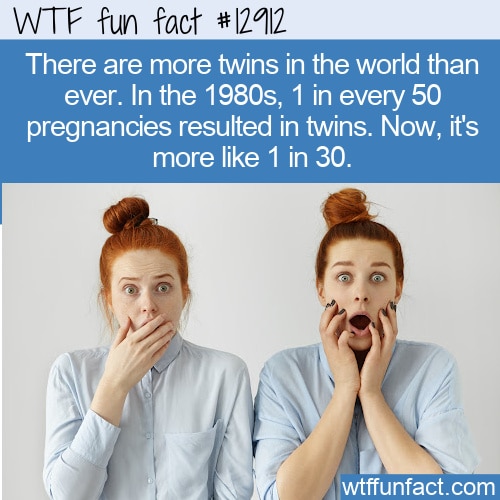 There are more twins living now than ever before. Well, at least we think so. We only started recording the rate at which twins were born in the 1980s when it was about 1 in every 50 pregnancies (2%).

The rise of the twin rate

Why so many twins?

Madrigal also reported that “A few years ago, the Centers for Disease Control researchers looked into the phenomenon.” They did so because, from an evolutionary perspective, twins are more likely to result in premature births and low birth weights – neither of which is ideal for human survival.

The reason? They can only guess, but “Older women tend to have more twins than younger women—and older women are having more of the nation’s babies. The researchers found this demographic phenomenon accounted for one-third of the increase. They attributed the rest of it to the increase in infertility treatments, specifically in-vitro fertilization and ‘ovulation stimulation medications.'”

Reproductive technology allows for multiple embryos to be implanted during IVF, and that’s common since implanting more embryos has a better chance of resulting in a successful pregnancy – of course, it also increases the chance of having twins. However, as the technology gets better, more couples are opting to have just one embryo transferred.

The “twin rate” seems to have leveled off as a result, but hasn’t reversed yet. — WTF fun facts

Source: “There Really Are So Many More Twins Now” — The Atlantic