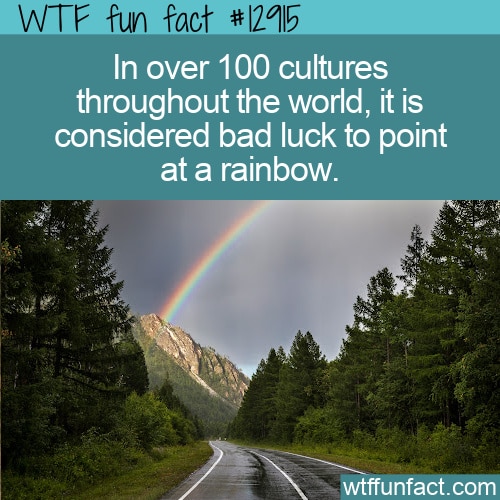 The recognition of the long-lasting and widespread “rainbow taboo” began in the 1980s when linguist Robert Blust was in the Tugu communit outside of Jakarta. He pointed out a rainbow and was promptly informed of the bad luck it carried by two people from two separate East Asian communities.

Returning to the Netherlands, he began researching the superstition and realized it was taboo in India as well. Realizing it was not confined to East Asia, he looked around the world and in documents throughout history to find out just how widespread the belief was.

Blust was originally told that pointing at a rainbow would make his finger go crooked and be bent like a rainbow permanently. But in other cultures, the bad luck it supposedly wrought was less specific.

According to Atlas Obscura (cited below): “Blust began to cast a wider net. He sent questionnaires to colleagues and missionary stations around the world, inquiring about rainbows and taboos related to them. He would soon amass evidence for the rainbow taboo—in some form or another—in 124 cultures. The prohibition turned up in North America, among the Atsugewi of northern California and the Lakota of the northern plains; in remote parts of Australia and isolated islands in Melanesia; among the Nyabwa of Ivory Coast and the Kaiwá of Brazil. At one time it was present in Europe, too: one of the Grimm brothers noted it in his book on German mythology. The belief was not found in every culture, according to Blust’s search, but it was present globally, across all inhabited regions.”

What’s so bad about a rainbow?

Ideas about what would happen if you point at a rainbow vary from culture to culture. Some people believe your finger will become deformed or paralyzed, others believe it will bring bad luck to your mother. In almost all cases, pointing with your index finger is the key to the offense. Telling someone to look at a rainbow or even pointing another part of the body at it carried no risk, according to Blust’s research.

He also discovered that there were things you could do to prevent the bad luck if you did accidentally point at a rainbow – including wetting your finger and sticking it in your belly button.

“The first is that, traditionally, rainbows were considered sacred, a manifestation of another realm. He writes that, accordingly, they were “greeted with that mixture of fear, awe and reverence generally accorded to spiritual things.” The second factor is that pointing is widely viewed as aggressive; guidebooks often advise travelers to avoid it.”

There aren’t too many widespread beliefs that exist in nearly every corner of the world. Things like flood myths or specific mythological storylines are some examples, but pointing out a rainbow is a very specific taboo.

Interestingly, Blust had a hard time getting his research published until recently. Once he did, anthropologists found it fascinating and are still studying it.

These days the taboo is taken less seriously, but people around the world are still aware of it.  — WTF fun facts

Source: “Even Rainbows Have a Dark Side_https://www.atlasobscura.com/articles/pointing-at-rainbows-taboo