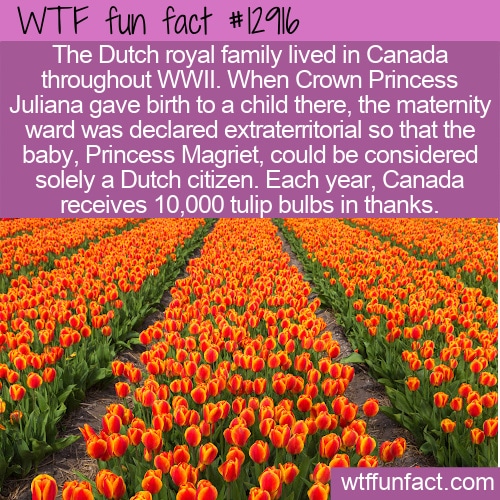 It may not seem like a big deal for a princess to be born in another country, but some royal families (any families, really) find it important for their children to be citizens of just one country. So when Princess Magriet of the Netherlands was born in Ottowa in 1943 after her family fled from the Nazis, a Canadian hospital did something remarkable.

The Netherlands in Canada

Crown Princess Juliana was going to give birth to her child in Canada regardless since she couldn’t go back to the Netherlands during the war. If she had a boy, he would have been next in line for the Dutch throne after his mother, making it very important that he be a Dutch citizen. Being born in Canada meant that the child could be considered a British subject (since it’s part of the British Commonwealth).

To avoid any controversy, the maternity ward was temporarily declared extraterritorial by the Canadian government so the child would not be a sole Canadian citizen. This was the case even though the baby happened to be a girl – Princess Magriet.

Princess Margriet is indeed a citizen of the Netherlands thanks to Canada’s gesture, and the family remains grateful to the country as a result. When they returned to their home after the war in 1945, the royal family send 100,000 tulip bulbs to the Canadian people. This is the origin of Ottawa’s annual Tulip Festival.

To this day, the Netherlands sends 10,000 tulip bulbs to Canada every year in thanks.

Princess Magriet has returned to Canada many times over. the years and has also attended the tulip festival in Ottawa.

Another fun fact: There is a reference to Magriet’s mother Queen Juliana being pregnant in the Diary of Anne Frank. — WTF fun facts

Source: “Princess of Netherlands Born in Canada” — The Canadian Encyclopedia