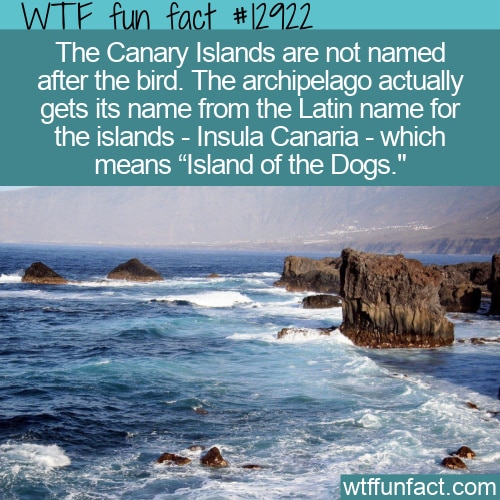 The Canary Islands usually make us think of the little yellow bird. But Canary doesn’t come from the bird’s name, rather, it comes from the Latin word Canaria (as in canine). The ancient Romans called the islands Insula Canaria, or “Island of the Dogs.”

The Canary Islands is a Spanish autonomous region near Morocco composed of 7 large islands and many more smaller islands. You may have heard of the second largest island – Tenerife – which is home to early 1 million people.

There is volcanic activity on some of the islands, which also house the world’s third largest volcano – Mount Teide on Tenerife.

While there is a dog breed popular on the Canary Islands – the Presa Canario – they are not native to the islands and were introduced by the Spanish. They are a type of mastiff used for guarding and herding. They were also used in dogfighting until it was outlawed by Spain in the 20th century.

How are the Canary Islands related to dogs?

Just look at the coat of arms of the Canary Islands, and you’ll see dogs instead of birds.

According to World Atlas (cited below): “The archipelago’s Spanish name Islas Canarias is derived from the Latin phrase Canariae Insulae which means the “island of dogs.” King Juba II of Mauretania, an ancient Kingdom in the Maghreb, is thought to have named the island of Grand Canaria named the island Canaria due to the presence of many large dogs on the island. Eventually, the entire archipelago became referred to as the Canary Islands.”

However, some believe the Roman name comes not from the presence of dogs but the worship of the creatures on the island. The original inhabitants of the islands were the Guanches, who mummified dogs (perhaps related to the Egyptian practice and the dog-headed god Anubis). It’s unknown how dog worship may have worked or if the animals were just considered holy creatures.

Source: “Did You Know That The Canary Islands Are Named After Dogs?” — World Atlas