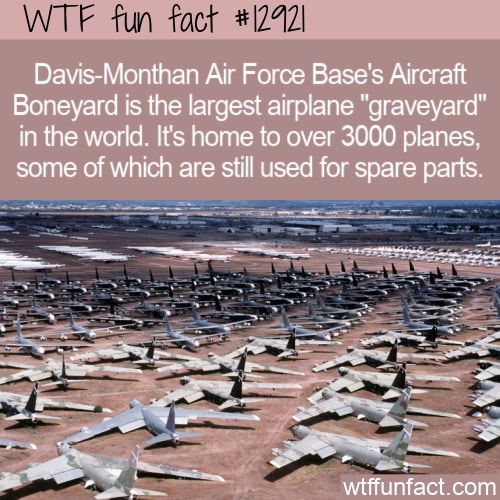 If you like airplanes (or are just mystified by the thought of seeing thousands of them), The Boneyard in Tucson, AZ – known more formally as the 309th AMARG Aerospace Maintenance and Regeneration Group at Davis-Monthan Air Force Base – may be just the place for you.

What is Tucson’s airplane “graveyard”?

According to Arizona Journey, a site for Tucson tourists (cited below): “AMARG is the world’s largest salvage yard, minus the snarling dogs. The aircraft are lined up in rows set up with military precision, stacked so closely together that from above their wings look like they are holding hands with each other, a sharp contrast to their former roles. It’s a starkly beautiful setting as, throughout the day, the silver fuselages reflect changing colors of the Rincon Mountains to the east.”

Since the planes are no longer fully operational, they’re just in permanent outdoor storage in the middle of the desert. The Sonoran Desert is apparently as good a place as any to place what is largely a giant airplane junkyard for defunct military aircraft since the dry air prevents rust.

Why prevent rust on planes that no one technically needs anymore? Well, some can be resurrected and others used for spare parts. In fact: “Despite its moniker, the Boneyard is not a place merely to stockpile airplanes in eternal rest. Some have been mothballed for spare parts and potential future activation. In 2015 a B-52 bomber old enough to qualify for AARP membership was restored and returned to flying condition. Though the Cold War may have ended, the men and women deployed at the Boneyard in Tucson are on constant alert for any future chills in relations between the superpowers.”

Despite its location on a military base, you can visit the airplane Boneyard in Tucson while touring the adjacent Pima Air & Space Museum.

But security is tight, so don’t expect to climb all over them. You can only catch a glimpse of F-14 fighter planes, for example, since they’re still flown by the Iranian Air Force “which is desperate for spare parts to maintain their fleet.”

Visitors can take a Tram Tour for $8 or Private Walking Tours for $75. — WTF fun facts

Source: “A fun visit to the massive Tucson airplane graveyard AKA “The Boneyard” (over 3000 planes)” — Arizona Journey