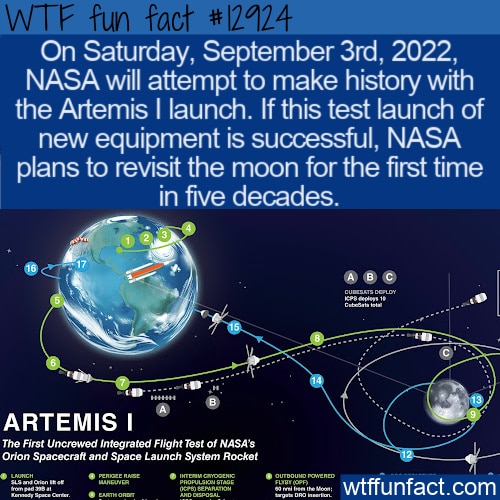 The NASA Artemis 1 mission is scheduled for September 3, 2022. But even if it’s scrubbed due to weather or technical issues, whenever it does launch it will be history-making.

For starters, Artemis I is the most powerful rocket ever built. NASA’s new Space Launch System (SLS), as well as the Orion spacecraft (which is also being tested), are integral parts of NASA’s plan to send people back to the Moon and further into space than ever before. If the technology is successful, it will show that we can build a sophisticated spacecraft capable of carrying humans back to the Moon.

And if Artemis I goes out without a hitch, it will carry the first woman and the first person of color to ever set foot on the moon in a few years.

This mission was supposed to happen a few years ago, but politics and the pandemic got in the way.

the NASA Artemis 1 mission is set to last 6 weeks. After reaching orbit, it will perform a trans-lunar injection and deploy 10 satellites plus the Orion spacecraft, which will enter retrograde orbit for 6 days. The hope is that the Orion will return to Earth after its mission and splash down in the Pacific Ocean without burning up on re-entry.

NASA tried to launch the mission on August 17, 2022, but had to scrap it after a series of delays during pre-flight testing. On August 29, the second try was capped after an issue with the core stage. Hopefully, the third time is the charm.

How can you watch the NASA Artemis I launch?

If you’re reading this before Saturday, September 3, 2022, at 2:17 EST, you can watch the launch for free online. NASA’s live streams (and pre-launch briefings are linked here).

According to IFL Science (cited below): “The rocket will launch from the historic Launch Pad 39B (Apollo and Skylab both launched from here) at NASA’s Kennedy Space Center in Cape Canaveral, Florida on Saturday, September 3. The launch window opens at 2:17 pm EDT (7:17 pm UTC) and will stay open for two hours, though it’s likely the launch will take place as soon as the window opens.”

If all goes well on the NASA Artemis 1 mission, Artemis 2 is set to carry a crew for a lunar flyby in the future, and Artemis 3 will carry astronauts back to the moon five decades after the last Apollo mission. — WTF fun facts

Source: “NASA’s Artemis I Will Make History This Weekend – Here’s How To Watch Live” — IFL Science