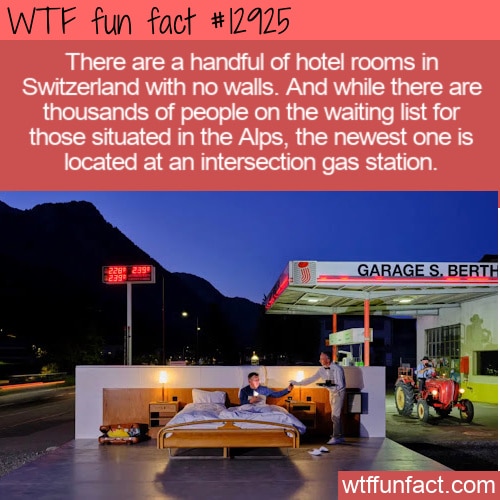 Back in 2017, a Swiss hotel room with no walls made the headlines. And it turns out the people who designed it have come up with another version – people are now paying over $300/night to sleep…wait for it…at a gas station!

Well, as long as you don’t like fresh air or sleeping peacefully, we might know just the place for you.

For us, the most important part of a hotel room is the ability to get some rest, so we won’t be signing up any time soon for the “room” located at an intersection and entirely without walls. Even if you have that fairly common love for the smell of gasoline, the idea of hearing traffic, noise, and smelling gas all night as you sleep outside a gas station (in a nice bed, though!) may not be the right choice for you either.

According to Architectural Digest (cited below): “Brothers and conceptual artists Frank and Patrik Riklin, who partnered with hotelier Daniel Charbonnier to create this hotel ‘room,’ are perfectly aware that you won’t be sleeping peacefully in their newest hospitality experience—but that is exactly the point. ‘In view of the current world situation, there is no time to sleep,’ the brothers said in a statement.”

But isn’t that why we try to get away?!

AD notes that “The open-air suite—which is located between a gas station and busy intersection and purposefully lacks a door, ceiling, or walls—is designed to keep you up so you have time to contemplate current social, economic, and environmental issues.”

A room with a view

The designers became famous with a similar concept a few years back – and while it’s still not one we would personally indulge in, at least it seems more fun and relaxing. In fact, the brothers’ first hotel room still has thousands of people on the waitlist after making headlines in 2017:

“This room is another iteration of the founders’ ‘zero real estate suites,’ which they launched back in 2008 as part of their Null Stern Hotel. The first three suites, which include a queen bed on a platform and two nightstands, all make use of the Swiss Alps and breathtaking Saillon landscape to create picturesque overnight stays in a glamping-like experience. Currently, there are over 6,000 guests on the waitlist eager for the opportunity to spend an evening at the non-traditional hotel,” says AD.

The Riklins don’t have the only open-air suites in the world – there are other hotel rooms without walls as well, and they’re quite popular.

We say to each their own. It’s just that we like to call that camping. — WTF fun facts

Source: “This Bizarre Hotel Room With No Walls or Doors Is Going for $340 a Night” — Architectural Digest