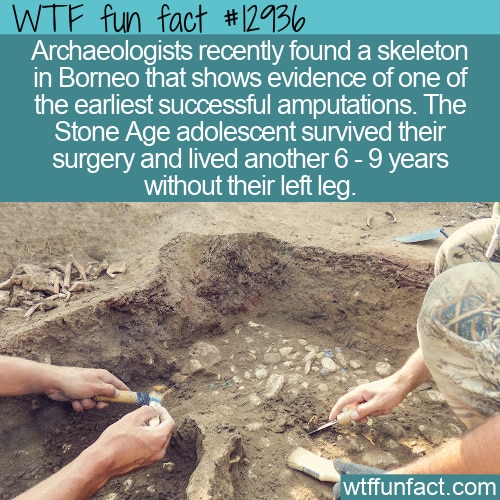 Archaeologists have found a skeleton bearing the signs of a Stone Age amputation procedure. This evidence for the first amputation (that we know of) is significant because it’s much earlier than previous evidence and the person it was performed on survived the surgery.

Is this the first amputation?

We’ll never really know of this skeleton belongs to the first person to survive an amputation since we can’t possibly know when we’ve collected every archaeological sample.

But what we do know is that the skeleton was found in a cave in Borneo (in Indonesia) and is roughly 31,000 years old! It belonged to a young adult (the gender is uncertain), possibly around the age of 19-20.

When the child was roughly 10 – 12, their left leg was amputated below the knee, and they went on to live for years as an amputee.

It appears the child died 6 – 9 years after the left leg amputation. That’s pretty impressive considering it was done without modern painkillers and the blood loss was probably severe.

It’s proof that there was some way of controlling the bleeding and helping the patient survive tens of thousands of years earlier than we first thought.

Proof of the amputation was discovered when researchers came across a grave and found a skeleton missing the lower part of its left leg. Because there were no bones found nearby, it was clear that the person was buried without a leg.

Upon closer inspection, researchers realized the bones had been carefully removed. Enough healing had taken place to indicate that it was an intentional surgery that took place years before the person’s death.

Because there were no signs of infection, bone crushing, or other fracturing, it’s clear that the leg wasn’t bitten off (by a crocodile, for example) or lost in an accident.

As the researchers put it in their article in Nature (cited below):

“There is no evidence of infection in the left limb, the most common complication of an open wound without antimicrobial treatment. The lack of infection further rules out the probability of animal attack, such as a crocodile bite, because an attack has a very high probability of complications from infection owing to microorganisms from the animal’s teeth entering the wound. The partial consolidation of the bone between the left tibia and fibula and complete closure of the distal end of the left fibula are consistent with late-stage amputation changes. The small size of the left tibia and fibula compared with the right suggests a childhood injury, as the bones did not continue growing. The severe bone thinning of the left tibia and fibula is also suggestive of the heavily restricted use of the left leg resulting in musculoskeletal disuse atrophy. Some thinning of the cortical margins of the right tibia suggests that TB1 was rarely ambulatory owing to the incapacitating nature of the injury to the lower left leg.”

TB1 is the name of the specimen. — WTF fun facts

Source: “Surgical amputation of a limb 31,000 years ago in Borneo” — Nature