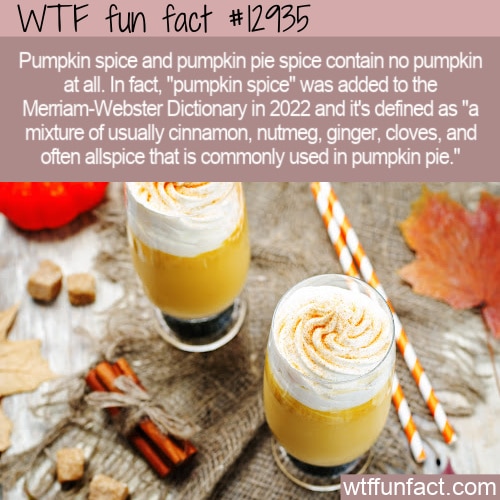 Traditionally, pumpkin spice flavorings have not contained pumpkin at all. Of course, pumpkin spice lovers have been mocked for their “fake flavor,” even though there are plenty of flavors that have no real foodstuffs in them. That pumpkin spice taste so many of us like is really just cinnamon, nutmeg, cloves, etc.

Starting around 2015, things changed for Starbucks fans. They actually got pumpkin in their pumpkin spice drinks.

Even though Starbucks’ pumpkin spice drinks are sold in the fall and winter, they are the chain’s most popular offerings, with the pumpkin spice latte (or PSL) maintaining the #1 spot. In fact, Starbucks sells around 20 million of them per year. We don’t drink them, but we can’t deny there’s a certain tastiness there (thanks to lots of sugar and fat and stimulating spices like cinnamon and clove).

According to Newsweek (cited below): “On August 30, Starbucks officially ushered coffee lovers into the fall season with the return of its pumpkin spice latte; however, the return has left some customers feeling disappointed, as they believe the iconic drink tastes different this year than in years past.
Posting to TikTok on Thursday, a purported Starbucks barista named Maria confirmed that the drink does, in fact, taste different this year because the company “changed” its pumpkin spice recipe. The video has amassed over 860,000 views and more than 1,400 comments.”

How could they change such an iconic flavor?! Well, it turns out that some stores are getting an updated recipe, but pumpkin has been part of it for around 8 years.

Now with real pumpkin (kind of)

While PSL fans on TikTok are insisting there’s something different about the 2022 lattes, Starbucks has maintained that they are using the same recipe as in previous years.

So what is pumpkin spice?

Until Starbucks relented and added some sort of pumpkin-derived flavoring, no pumpkin spice actually contained pumpkin. Even the pumpkin pie spice we buy in stores is simply a blend of cinnamon, nutmeg, cloves, allspice, and ginger.

Regardless of whether it’s “real” or not, the flavor is now iconic. In fact, Merriam-Webster added the phrase “pumpkin spice” to their dictionary in 2022. — WTF fun facts