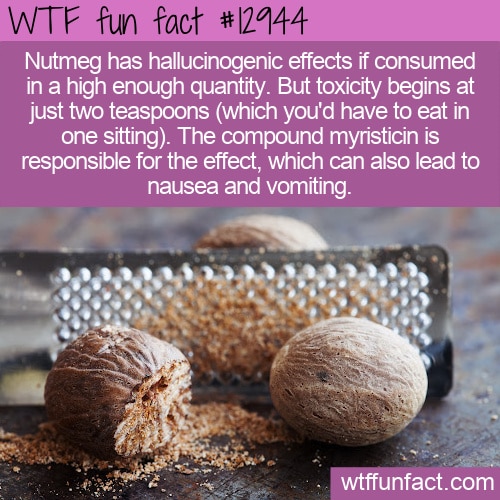 When fall and winter come around each year, many of us are reminded of happy times by the smell of nutmeg (and the baked goods that act as a nutmeg vehicle). Well, it turns out we should all stick to the loaves of bread and cakes and stay away from nutmeg on its own. We weren’t aware until now of the hallucinogenic effects of nutmeg.

Don’t let your kids do nutmeg.

Nutmeg gets you high?

We all know the old saying by Galen that anything consumed in enough quantity is poisonous. But for nutmeg, that quantity is two tablespoons.

Of course, nutmeg toxicity probably isn’t going to get you if you eat a whole loaf of pumpkin bread or a whole pie (the stomach ache will be enough punishment). If that were true, we’d hear a lot more about it. But also, two teaspoons is over twice as much as anyone puts in a recipe (1/4 to 1/2 TEAspoon is usually the limit).

Sit down and eat two tablespoons of the stuff in one sitting and you’re in for a baaaad time thanks to a toxic compound called myristicin. Sure, it will give you hallucinations, but it will also make you yearn for better times as you lay on the bathroom floor and spend the rest of the day vomiting.

In other words, don’t try this at home. The risk far outweighs any interesting side effects.

Nutmeg has hallucinogenic effects if consumed in a high enough quantity. But toxicity begins at just two teaspoons (which you’d have to eat in one sitting). The compound myristicin is responsible for the effect, which can also lead to nausea and vomiting.

The hallucinogenic effects of nutmeg are not like visions of sugarplums

Let’s put it this way – if there were any sort of traditional high you could get from something as common as nutmeg, we’d be seeing a lot of bad TikToks of ill-conceived “nutmeg challenges.”

According to Healthline (cited below – and fact-checked by experts), the toxic compound in nutmeg can be found elsewhere. “Myristicin is a compound found naturally in the essential oils of certain plants, such as parsley, dill, and nutmeg,” but it’s found in the highest concentration in nutmeg.

The myristicin in nutmeg acts a bit like the compound in peyote (called mescaline) in that it acts on the central nervous system (CNS) and enhances the neurotransmitter called norepinephrine. But unlike peyote, there are no special nutmeg rituals…for a reason. That’s because myristicin also affects the sympathetic nervous system and that’s a system you really don’t want to mess with since overstimulation produces anxiety, panic attacks, insomnia, shortness of breath, heart palpitations, jitteriness, poor digestion, and even high blood pressure.

That’s not a fun time. And in that sense, it’s not at all going to be like a peyote trip. Besides, stimulating the CNS can also cause nausea, dizziness, and other side effects.

In other words, you’re just poisoning yourself if you try to take nutmeg to get “high.”

The history of nutmeg intoxication

There aren’t many studies on this phenomenon (thankfully, not many people have been misguided enough to do this to themselves). But some people didn’t know any better – like a woman who put FAR too much nutmeg in a milkshake and experienced “nausea, dizziness, heart palpitations, and dry mouth, among other symptoms. Although she didn’t report any hallucinations, she did mention feeling as if she was in a trance-like state,” according to Healthline.

More recently, a 37-year-old woman did try two tablespoons of nutmeg – she missed out on any hallucinations or trance-like states and just felt “dizziness, confusion, grogginess, and an extremely dry mouth” for about 10 hours. Not a great way to spend a day, if you ask us.

A 10-year review of cases from the Illinois Poison Center “revealed over 30 documented cases of nutmeg poisoning,” “both intentional and unintentional exposures, as well as drug interactions leading to toxicity.” 50% of those cases were from people trying to get high from nutmeg, mostly kids under 13. They experienced hallucinations, drowsiness, dizziness, dry mouth, confusion, and – in two cases – seizures. Oh, and then there was some respiratory, cardiovascular, and gastric distress.

If nutmeg seems like an easy way to get high, you might also want to know it can potentially cause organ failure, in some cases, and it can kill you when combined with other drugs.

Mind-bogglingly, some people have tried to smoke or inject nutmeg to get high. But “Like any other drugs, the dangers of nutmeg overdose can occur no matter the method of delivery.” — WTF fun facts

Source: “Can You Get High on Nutmeg? Why This Isn’t a Good Idea” — Healthline