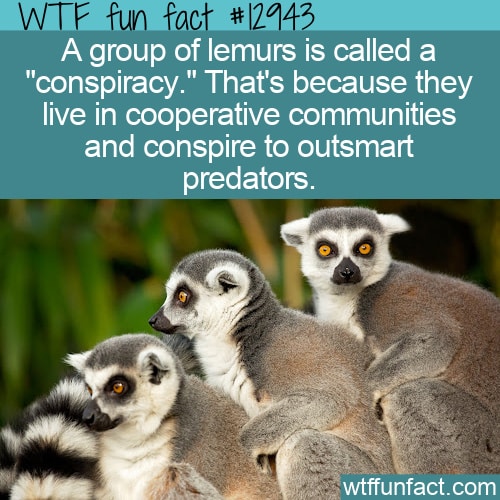 Lemurs are fascinating creatures. They’re also diverse – there are 113 types of lemur, all native to Madagascar. Lemurs are social creatures that are active during the day and live in groups of up to 30. These groups are called a conspiracy of lemurs (or alternately a troop).

Why is it called a conspiracy of lemurs?

According to LiveScience (cited below), “Lemurs’ main predators are fossas (Cryptoprocta ferox) — carnivores that looks a bit like a cat or weasel. Lemurs can also become prey for large snakes, birds, humans and animals humans have introduced to Madagascar, such as domestic cats.”

By living in groups, it’s easier for lemurs to alert each other to dangers. The reason a group of lemurs is also called a “conspiracy” is that they work together (or conspire) to outsmart predators and stay safe.

Unfortunately, they can’t conspire to stop habitat destruction. “In 2020, the IUCN(opens in new tab) announced that 98% of all lemurs are threatened with extinction. The main reasons lemur populations have declined so significantly is because of habitat loss due to deforestation(opens in new tab) and hunting in Madagascar. Their habitat is often destroyed so that it can be used for agriculture, and they are hunted for food,” reports LiveScience.

After conspiring to outsmart the predators they have some control over, lemurs also use a technique called “mobbing” to attack predators all at once.

Lemurs can jump up to six times their body length, so they presumably seem like they come out of nowhere and predators hardly get a chance to know what hit them (literally – conspiracies of lemurs have been known to beat large snakes to death).

Cooperative attacking and harassing (aka mobbing) is not limited to lemurs. Many species use this technique to eliminate the threat of predators.

These furry creatures seem to have quite a few sophisticated anti-predator behaviors. — WTF fun facts