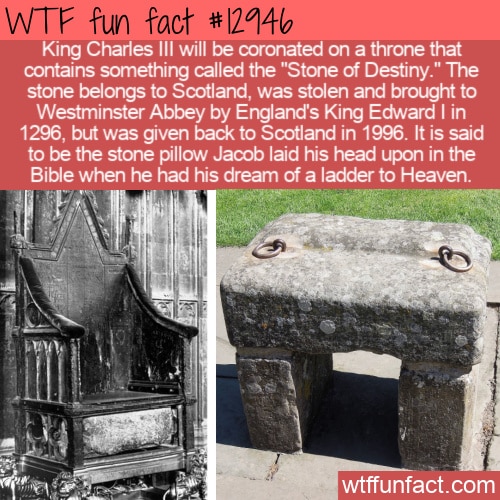 Even if you’re a “royal watcher” and love the idea of real-life kings, queens, and princesses, you can still feel a little “icky” about the idea that royals often feel like they were chosen by the universe in some way to wield power and influence over others. Perhaps that’s why the so-called “Stone of Destiny” is making headlines before the coronation of King Charles III.

What is the Stone of Destiny?

Also called the Stone of Scone, this slab of red sandstone has been used in the UK since the 9th century when it was used to coronate Scottish kings. King Edward I stole it in 1296 after invading Scotland, and it was built into a throne in Westminster.

The Stony of Destiny long sat at Westminster Abbey and is still today what kings and queens of England sit upon during their coronations (with a cushion, of course, because royalty doesn’t want to be uncomfortable).

The stone was briefly stolen on Christmas Day in 1950 by students and a teacher making a statement about Scotland’s independence, but (while it was broken in the process) it was returned 4 weeks later. And the people who stole it were not charged – instead, a movie was made about the effort, aptly titled Stone of Destiny.

Soon, it will play a role in King Charles III’s rapidly-approaching coronation.

In 1996, the stone was returned to Scotland, but it will make the journey to England for the King’s coronation.

What’s so special about the stone?

The stone has some conflicting stories associated with it. The most common legend is that it was used by Jacob as a pillow in the Book of Genesis. It’s the pillow he laid his head upon when he had the dream of Jacob’s ladder.

That means it would have been mined in Palestine and the story goes that it made its way through Egypt, Spain, and to Ireland, courtesy of the prophet Jeremiah before the next part of the legend begins.

Later, the stone was brought from Ireland to Argyll, Scotland by Fergus the Great, the legendary first king of Scotland. (More accurately, he was the King of Dál Riada, a territory that spanned modern-day Scotland and Ireland.)

During the Viking raids on Scotland in the 9th century, the stone was moved to the Abbey at Scone (which is why it’s often called the Stone of Scone). It was moved there by Kenneth MacAlpin, which sounds like a modern name but is actually the name of a 9th-century king who began to consolidate the lands (and peoples, such as the Picts) into a separate country called Scotland.

Its biblical origins are unlikely, however, since geologists have proven that it’s “lower Old Red Sandstone” from a quarry very close to Scone. However, some insist the real Stone of Destiny still resides in Scotland because what was stolen by King Edward I and then repatriated had always been a replica of the original. — WTF fun facts

Source: “The “Stone Of Destiny” Is Returning To Westminster For The Coronation Of King Charles” — IFL Science