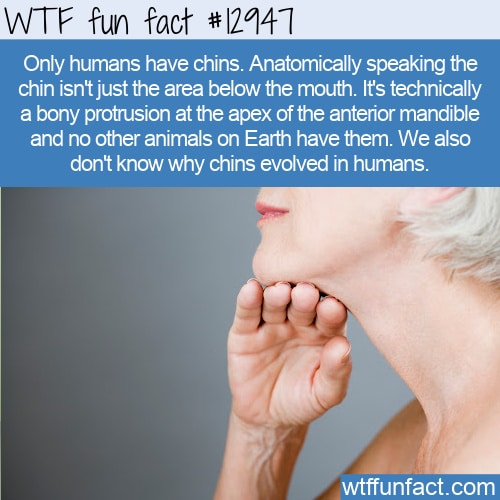 We found this hard to believe at first, but it’s the little details that matter when it comes to anatomy. As an anatomical feature, only humans have chins.

That seems surprising if you’ve ever rubbed your pet under their little “chin.”

While we basically all call the bottom of the face a “chin,” a chin is technically a bone formed at the apex of the lower jaw. And a chin is a bony protrusion that juts out in a way that is only seen in human skulls.

According to Smithsonian Magazine (cited below): “Even chimpanzees and gorillas, our closest genetic cousins, lack chins. Instead of poking forward, their lower jaws slope down and back from their front teeth. Even other ancient hominids, like the Neanderthals, didn’t have chins…”

Ok, so maybe anatomical technicalities aren’t really that amazing, but what is interesting is that the chin protrusion doesn’t really serve a purpose. No one knows why humans even have chins.

Why do chins exist in humans?

Of course, once anthropologists and evolutionary biologists realized this bit of human uniqueness, they set about trying to explain why we evolved chins. Maybe it’s to help us chew food? Maybe it helps us speak?

Nope. Those ideas have all been largely debunked. The chin is in the wrong place to help reinforce the jaw for chewing. Our tongues don’t seem to generate enough force to require a chin to help us speak. If the chin developed to help us find mates, then it would only appear in one gender.

The list of reasons the chin doesn’t need to exist goes on and on.

According to Duke University’s James Pampush, the chin may not actually serve a purpose at all. This would make it a “spandrel” – “an evolutionary byproduct left from another feature changing.”

“In the chin’s case, it could be the result of the human face shrinking over time as our posture changed and our faces shortened, or a remnant from a period of longer jaws.”

Of course, there’s really no way to prove the chin serves no function since you’d have to reject every possible hypothesis first.

It looks like we may just have to live with the mystery. — WTF fun facts

Source: “A Chin-Stroking Mystery: Why Are Humans the Only Animals With Chins?” — Smithsonian Magazine