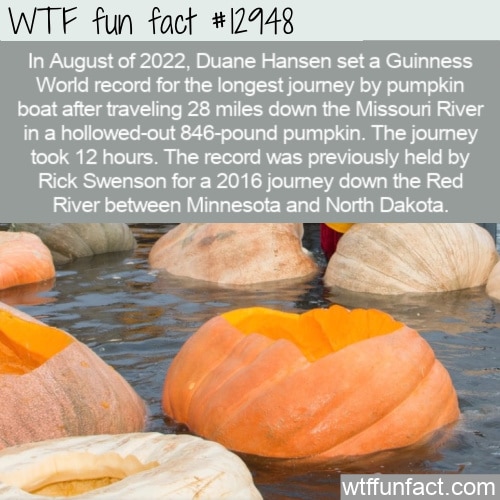 Have you ever looked at a giant pumpkin and thought to yourself, “that looks seaworthy”? Well, plenty of folks do, which is where there’s a Guinness World Record for the longest journey in a pumpkin boat.

On August 27, 2022, a Nebraska man named Duane Hansen took for the river in an 846-pound pumpkin and rode it 38 miles down the Missouri River. The S.S. Berta turned out to be seaworthy for the 12-hour tour from Bellevue Marina to Nebraska City’s Riverview Marina.

Hansen’s goal was to beat the previous Guinness World record for a journey by gourd set in 2016 by Rick Swenson. He sailed on the Red River between Minnesota and North Dakota.

According to Smithsonian Magazine (cited below): “Hansen spent years on the project, eventually naming his prize pumpkin Berta, he told News Channel Nebraska’s Dan Swanson. He was inspired to break the record after attending a three-day pumpkin growing seminar in Portland, Oregon, five years ago, when he met a woman who at the time held the record he sought.”

Apparently, you can get some really unique ideas at pumpkin-growing seminars!

His water-worthy pumpkin was named the SS Berta and had a circumference of around 146 inches. And the trip was not without its challenges.

“Hansen hopped inside and took off for the day-long journey, with family members and friends cheering him on from along the banks. Throughout the next 12 hours, he fought to stay afloat as an array of obstacles—including rocks, sand bars and waves—threatened to tip him over.”

Smithsonian Magazine notes that “To comply with the Guinness World Records’ rules, Hansen had asked non-family members to witness the event. Attendees included Bellevue City officials, who took photos and videos along the way to provide evidence.” — WTF fun facts