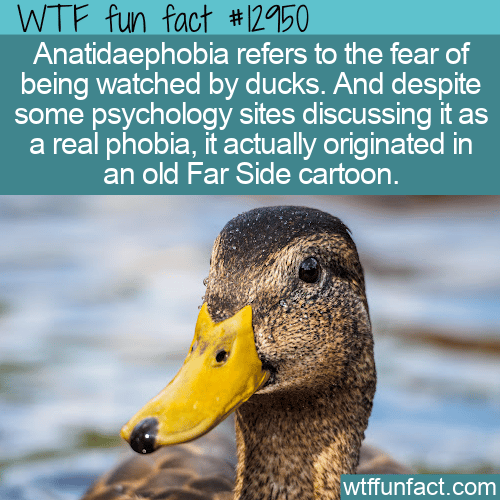 Anatidaephobia is the fear of being watched by ducks. And despite this existing as a fun fact for decades, it may not actually be a real thing. If it is, it originated in an awfully strange place for a real phobia.

Who’s afraid of a duck?

Ducks are probably only watching you if you get too close to them or their nests. But we don’t want to downplay phobias, because they’re very real and produce real physical symptoms. So, could someone fear that a duck is watching them? Sure.

The question is whether this fear rises to the level of anatidaephobia. That’s less likely since the word was coined by Gary Larson in his comic The Far Side. The idea of this particular phobia is a hoax.

Phobias spawn feelings of intense fear and worry about object or situations. While there’s no formal duck phobia, the idea of anatidaephobia comes from the Greek word “anatidae,” meaning “swan, ducks, or geese,” and “phobos,” meaning “fear.”

According to PsychCentral (cited below, and which does eventually get around to the point of mentioning it’s a hoax): “People who experience this phobia may not necessarily be worried that a duck might attack them. Instead, their fear centers around the idea that somewhere, a duck could be watching them — constantly.”

However, while “Anatidaephobia may seem like it could be a credible phobia, the fear of being constantly watched by a duck is actually a fictional phobia created for entertainment.”

In other words, you won’t find a fear of ducks in the Diagnostic Manual of Mental Disorders, fifth edition (DSM-5), though you will find diagnostic criteria for “Specific Phobia: Animal type.”

That doesn’t mean a fear of birds, in general, is fake though. “Ornithophobia, or the fear of birds, is an animal type of specific phobia. Some people with this type of phobia may fear all birds or just a specific type of bird, such as a duck. Although anatidaephobia may not be real, the fear of ducks is a very real phobia.”

In the end, PsychCentral explains that: “Anatidaephobia can be traced back to Gary Larson, creator of the ‘The Far Side’ comic. Larson’s cartoon comic depicted a paranoid office worker with the caption, ‘Anatidaephobia: The fear that somewhere, somehow, a duck is watching you.’ The comic showed a duck looking out a window from another building behind the office. The point of Larson’s cartoon was to illustrate that any object can be a source of fear. Since the fictional phobia debuted in 1988, anatidaephobia has gained popularity. This has led to the internet questioning the phobia’s veracity. While anatidaephobia is indeed a hoax and not a real phobia, fears and phobias are no laughing matter. Phobias can have serious affects on a person’s daily life.” — WTF fun facts

Source: “Fear of Ducks Watching You: Is Anatidaephobia a Real Condition?” — PsychCentral