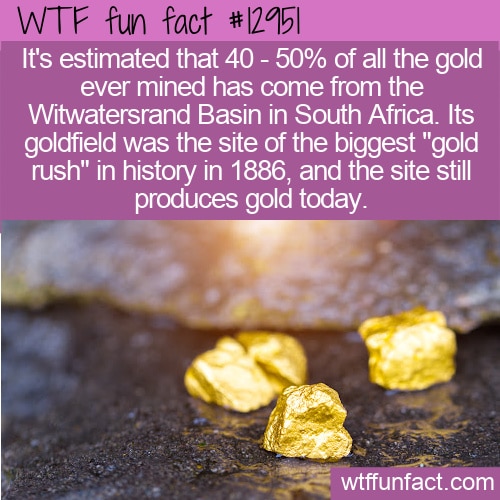 Around half of the gold in the world today comes from South Africa. And it wasn’t even discovered until the 1850s. The Witwatersrand gold field still produces gold to this day.

What and where is Witwatersrand?

The majority of the Witwatersrand Basin is underground, yet it holds the world’s largest gold reserves. It has produced around 88 million pounds of gold since it was discovered.

Located in South Africa, most of the basin is hidden away deep inside the earth. But there are outcrops that are more reachable, such as the one in Gauteng that forms the Witwatersrand ridge. The southern part of the ridge, which is roughly 3 miles west of modern Johannesburg, South Africa was discovered on a farm. Later, people realized that the Centra Rand Gold Field actually continued for 31 miles.

What is Witwatersrand’s history with gold?

In 1852, a Welch mineralogist named John Henry Davis discovered a gold deposit and brought his finding to President Andries Pretorius (who came from a Dutch settler family, was the leader of the Boers, and played a role in later forming the South African Republic). With the fear of what would happen if news got out, Davis was told to sell the gold he found to the Transvaal Treasury for £600 and leave the country.

Of course, news of a gold mine doesn’t stay quiet for long. Other foreigners went through the same thing. George Harrison and Pieter Jacob Marais also found gold and sold out their stakes.

But in September 1886 President Paul Kruger (a Boer who had successfully defended the territory the Dutch took over from the British) declared nine farms in the area open for digging to the public. This sparked the Witwatersrand Gold Rush.

There were already small Dutch gold mines in the area before the late 1880s. But the gold rush meant signaled open season for wealthy men from around the world to start dynamiting the landscape.

Then, mining magnate Cecil Rhodes (founder of DeBeers) got involved. He had already wreaked havoc by displacing people and destroying land in modern Zambia and Zimbabwe. Then, he moved on to the south African cape to find diamonds before hearing about the gold.

The gold found in the region gave the British motivation to take the land the Dutch had claimed for themselves. Gold magnates sought to overthrow governments. They led bloody uprisings, staged raids, and built enormous sites for their workers to live on the land being plundered.

Modern-day effects of the gold rush

The gold rush is credited with the foundation of the modern city of Johannesburg. However, the city still suffers from tremors and other surface instabilities (like sinkholes) after being hollowed out by gold-seekers.

According to Atlas Obscura (cited below): “The mines in the Witwatersrand Basin are some of the deepest in the world, tunneling miles below the surface. The deepest mine, Mponeng, tunnels 2.5 miles below the surface, and houses the world’s tallest elevator, which can go down more than 7,000 feet in three minutes, traveling up to 40 miles per hour. As the gold is extracted, the mines had to be dug deeper to keep the supply up. In certain places, it can take miners two hours to get from the surface to the depths of the mine, where they face extraordinarily dangerous conditions. Gold mining has been on the decline since the 1980s, which has had a huge impact on the economic health of the region that has long glittered with gold. Today, there are just 120,000 remaining workers in the once immensely profitable gold industry in South Africa.” — WTF fun facts