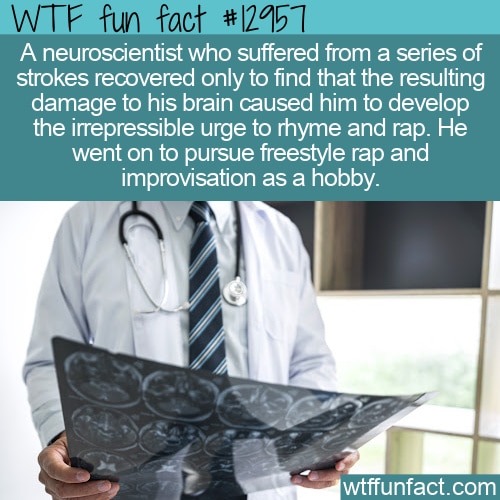 A recent publication reports that a neuroscientist who suffered a series of strokes and seizures couldn’t stop rhyming and rapping after his recovery.

Of course, the neuroscientist’s name has been withheld to preserve his privacy, but a Feb 2022 piece in the journal Neurocase titled “The neurologist who could not stop rhyming and rapping” (cited below) says he is 55 years old.

In the abstract, author Mario Mendez states that “His strokes included right posterior cerebellar and right thalamic infarctions, and his subsequent focal-onset seizures emanated from the left frontotemporal region.

The urge to rap

The abstract goes on to describe the aftermath of his strokes:

“On recovery, he described the emergence of an irresistible urge to rhyme, even in thought and daily speech. His pronounced focus on rhyming led him to actively participate in freestyle rap and improvisation. This patient’s rhyming and rapping may have been initially facilitated by epileptiform activation of word sound associations but perpetuated as compensation for impaired cerebellar effects on timed anticipation.”

We still don’t know the underlying mechanisms that cause a person’s brain to develop linguistic dysfunctions after an injury such as a stroke. Some strokes affect the ability to speak or understand language, while others cause brain injuries with more unique symptoms. The irrepressible urge to rhyme is certainly a unique one!

In 2019, The Atlantic published a piece on a 50-something man who couldn’t stop rapping after a stroke – and it’s likely the same person.

Dr. Sherman Hershfield specialized in physical medicine and rehabilitation and was in excellent health before he was plagued by blackouts and then a grand mal seizure and series of strokes. Then: “His personality also seemed to change. He suddenly became obsessed with reading and writing poetry. Soon Hershfield’s friends noticed another unusual side effect: He couldn’t stop speaking in rhyme.” — WTF fun facts

Source: “The neurologist who could not stop rhyming and rapping” — Neurocase