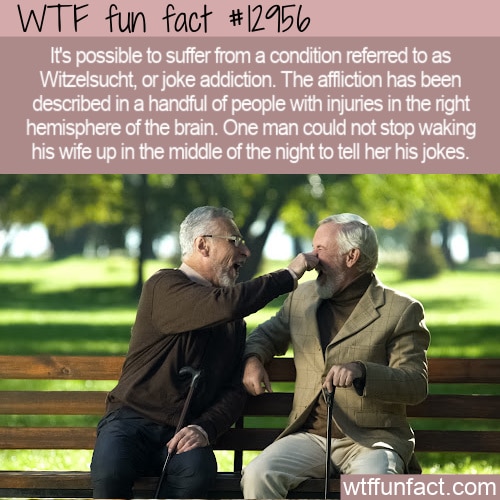 Have you ever met anyone who couldn’t stop telling jokes, even if no one else found them funny? Maybe they had Witzelsucht.

In 2016, neuroscientists Elias Granadillo and Mario Mendez published a paper titled “Pathological Joking or Witzelsucht Revisited” in The Journal of Neuropsychiatry and Clinical Neurosciences that described two patients with damage to their brains suffering from joke addiction.

They explained that “impaired humor integration from right lateral frontal injury and disinhibition from orbitofrontal damage results in disinhibited humor.” Two men were used as an example.

According to Discover Magazine:

“Patient #1 was a 69-year-old right-handed man presented for a neuropsychiatric evaluation because of a 5-year history of compulsive joking… On interview, the patient reported feeling generally joyful, but his compulsive need to make jokes and create humor had become an issue of contention with his wife. He would  wake her up in the middle of the night bursting out in laughter, just to tell her about the jokes he had come up with. At the request of his wife, he started writing down these jokes as a way to avoid waking her. As a result, he brought to our office approximately 50 pages filled with his jokes.“

“Patient #2 was a 57-year old man, who had become “a jokester”, a transformation that had occurred gradually, over a three period. At the same time, the man became excessively forward and disinhibited, making inappropriate actions and remarks. He eventually lost his job after asking “Who the hell chose this God-awful place?” The patient constantly told jokes and couldn’t stop laughing at them. However, he did not seem to find other people’s jokes funny at all.”

“Several cases have been reported in the neurological literature, often associated with damage to the right hemisphere of the brain. Witzelsucht should be distinguished from ‘pathological laughter‘, in which patients start laughing ‘out of the blue’ and the laughter is incongruent with their “mood and emotional experience.” In Witzelsucht, the laughter is genuine: patients really do find their own jokes funny, although they often fail to appreciate those of others.” — WTF fun facts