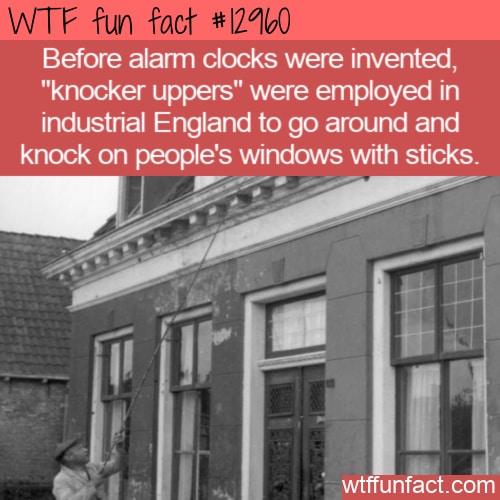 No one enjoys an alarm clock. But just imagine not having one and relying on someone to stop by your home and bang on your window or door to get you out of bed in the morning. That’s what happened in industrial England before alarm clocks were invented. The human alarm clocks were known as “knocker uppers” or simply “knockers.”

Who were the knockers?

According to Snopes (cited below): “Before the average industrial worker in England had access to alarm clocks, someone needed to wake them up. This fell to the ‘knocker-ups,’ or ‘knocker-uppers,”’or simply ‘knockers’ who would go around working-class neighborhoods around Britain with sticks, pea-shooters, poles or anything else that would help them knock on doors and windows to get people up.”

Try hitting the snooze on that!

According to the BBC, they “were common in mill towns in northern Britain, or in London where dockers had unusual hours, and even with brewery workers in less industrial towns in Dorset.”

How did the knocker uppers come about?

A 2020 article in the Journal of Victorian Culture, “Knocker Ups: A Social History of Waking Up in Victorian Britain’s Industrial Towns” explains:

“In pre-industrial societies, people organized their activities around diurnal and seasonal rhythms. Historians have argued that in contrast, industrialized societies became preoccupied with time and watching the clock. Time became money. Beginning work at factories at a fixed hour in the day became crucial for both factories and workers. In particular, wages of industrial workers became bound by time – if they failed to report to their duties on time they were fined. Within this context, knocker ups emerged in British industrial society to perform the vital duty of waking up industrial workers. Consequently, they became an integral part of the service industry created to cater to working-class clients. By waking up industrial hands on time, knocker ups contributed to industrial productivity. Usually, knocker ups went around industrial towns waking up clients with their innovative tools. Some used sticks and canes while others shot peas through pipes. Either way, the knocker ups used their creative ways to let their clients know it was time for them to wake up.”

We just wonder how the neighbors felt on the days they got to sleep in! — WTF fun facts

Source: “Who Were the Knocker-Uppers?” — Snopes