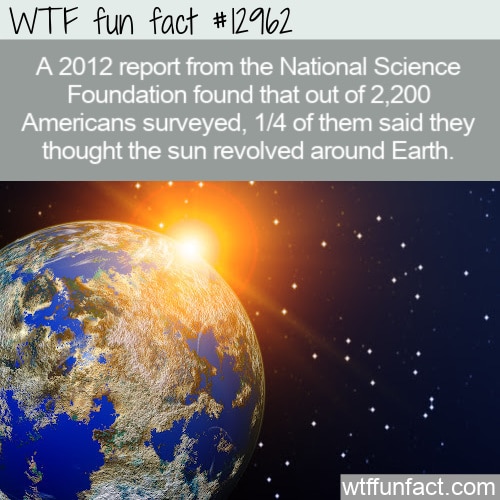 The Earth’s rotation around the sun isn’t an opinion, it’s a fact – and one we learn in elementary school. Of course, we don’t retain all of that information throughout our lives, which is why some people answered a question about it incorrectly.

In need of a revolution

Now, this is disturbing in many ways. However, some people don’t do well when quizzed on the spot. We’d like to think that it’s more of a misunderstanding than a quarter of Americans truly believing that the Earth is the center of the solar system.

Spoiler alert: the Earth revolves around the sun.

Parsing data on the earth’s revolution

Here’s how the survey was done: People were asked a (theoretically simple) question: “Does the Earth go around the Sun, or does the Sun go around the Earth.”

According to NPR (cited below): “In the same survey, just 39 percent answered correctly (true) that ‘The universe began with a huge explosion’ and only 48 percent said ‘Human beings, as we know them today, developed from earlier species of animals.’ Just over half understood that antibiotics are not effective against viruses.”

It’s a bit of an embarrassing science deficit. In fact, that last misunderstanding (about antibiotics) has been downright dangerous.

However, NPR goes on…“As alarming as some of those deficits in science knowledge might appear, Americans fared better on several of the questions than similar, but older surveys of their Chinese and European counterparts. Only 66 percent of people in a 2005 European Union poll answered the basic astronomy question correctly.”

But let’s not celebrate too soon because “both China and the EU fared significantly better (66 percent and 70 percent, respectively) on the question about human evolution.” — WTF fun facts

Source: “1 In 4 Americans Thinks The Sun Goes Around The Earth, Survey Says” — NPR