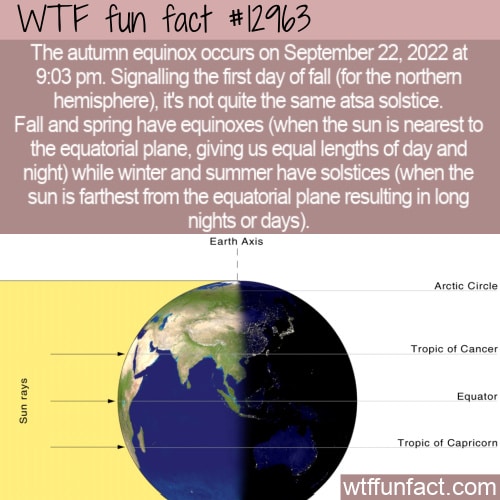 Solstice, equinox – what’s the difference? We know these things meant more to people in agricultural societies, but they still dictate the way we do things today to some extent. The 2022 autumn equinox will begin on September 22 at 9:03 pm.

Why is the autumn equinox so specific?

This is a natural phenomenon that influences culture, not the other way around. So while you might start shopping for your autumn decor in August, fall doesn’t really begin until the solar system says so.

The autumnal equinox occurs when the sun is nearest to the equatorial plane (the imaginary extension of the equator), giving us a day with equal amounts of sunlight and darkness. It lasts a few days, and as soon as it’s over, the days start to get shorter.

Spring also has an equinox. When it’s over, the days start to get longer.

Winter and summer, on the other hand, have solstices.

What’s the difference between an equinox and a solstice?

The summer and winter solstices occur when the sun is farthest from the equatorial plane. They are the day when the daylight is longest (spring) or shortest (winter).

So while the solstices and equinoxes each usher in a new season, each only applies to two seasons and represents a different phenomenon. (And all of the seasons are the opposite in each hemisphere – we’re only talking about the northern hemisphere here!)

What’s so fun about the autumnal solstice?

If you like fall weather (and live in the northern hemisphere), you’re probably pretty excited about its official start.

Historically, the equinox signaled the end of the outdoor working season or harvest season. It was a time to celebrate all of the hard work nature had done for humans and that humans did to reap the benefits and survive through winter. It’s traditionally a time to give thanks and take stock of all of nature’s bounty a community had received.

In many places, it was a time of harvest festivals, feasting (at least on the things that might not be preserved over the winter), and thanking the gods of the harvest. — WTF fun facts

Source: “The Spiritual Meaning of the Autumn Equinox” — Spirituality & Health