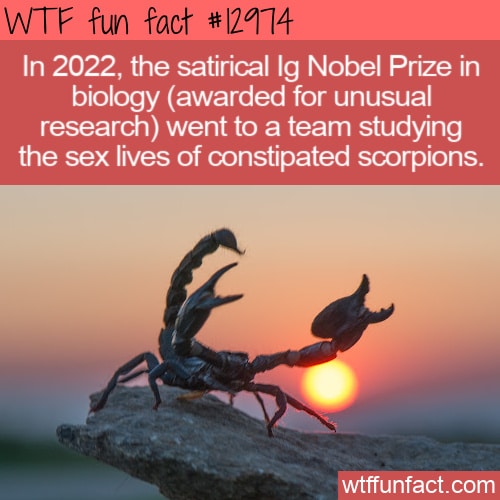 The Ig Nobel Prizes have been awarded to 10 unusual (or unusually unuseful) scientific research projects each year since 1991. While it’s all in good fun, we couldn’t help but do a double-take this year at one of the winners – a team that published a study on the sex lives of constipated scorpions.

Constipated scorpions have it rough

Solimary García-Hernández and Glauco Machado of the University of São Paulo in Brazil won the 2022 Ig Nobel in biology for trying to discern whether being constipated affects a scorpion’s sex life. (To be fair, we can’t help but think being constipated is kind of a bummer for any creature.)

According to an Associated Press story on the prizes, “Scorpions can detach a body part to escape a predator — a process called autotomy. But when they lose their tails, they also lose the last portion of the digestive tract, which leads to constipation — and, eventually, death, they wrote in the journal Integrated Zoology.”

“The long-term decrease in the locomotor performance of autotomized males may impair mate searching,” they wrote.

Ok, maybe constipated humans don’t have it so bad after all.

Why even study this?

So, this particular study came about in an interesting way. The paper’s lead author Solimary García-Hernández had long been studying the scorpion species Ananteris balzani.

This species has an interesting characteristic – they shed their tails to help them escape a predator.

According to Smithsonian Magazine (cited below): “It was a big surprise in 2015 when she, while working as part of a larger research team, found that Ananteris scorpions are capable of shedding their tails. “Autotomy”—the process of dropping a body part to escape a predator—was until then known to have evolved in only a handful of animal lineages like starfish, spiders and certain lizards.”

Ok, so we totally understand wanting to look more closely into that interesting fact, especially since it turns out that when lizards shed their tails, it can impact their ability to walk but doesn’t kill them. However, scorpions are different.

When Ananteris scorpions shed their tails, their digestive tract backs up with feces, and they get swollen and die within around 8 months.

That’s weird since animals don’t typically adapt in a way that’s fatal to them unless it somehow helps their species. In this case, the extra months likely give them more time to reproduce. And that’s where studying their sex lives comes in.

The sex lives of constipated scorpions

García-Hernández decided to monitor the post-tail life of these scorpions to see how tail loss impacted their ability to reproduce.

“The team then set up a series of matings between stump-tailed and intact scorpions. García-Hernández predicted that autotomized male scorpions would be less successful at mating than their fully endowed counterparts, since the tail plays an important role in their complicated mating ritual.”

Male scorpions use their tails both to show off to mates and during intercourse, so not having a tail should make mating difficult. However, it turns out they just used their stump and were just fine.

It was a different story for females, however.

According to Smithsonian, “when the team explored the reproductive costs paid by stump-tailed females, the story was different. They found that tailless females, while able to mate successfully, went on to have 20 percent fewer offspring than intact females.

The reason for this difference? The five-month scorpion pregnancy provides a lot of time for females to get more and more constipated, says García-Hernández. She hypothesizes that the buildup of feces caused by the loss of the anus is either toxic to the embryos or that the feces simply crowds out the developing scorplings. This latter hypothesis is supported by the fact that a severely constipated scorpion can weigh 30 percent more than it did before it lost its tail. By comparison, that’s equivalent to a 150 pound person gaining 45 pounds of poop weight.” — WTF fun facts

Source: “For Constipated Scorpions, Females Suffer Reproductively. Males, Not So Much.” — Smithsonian Magazine