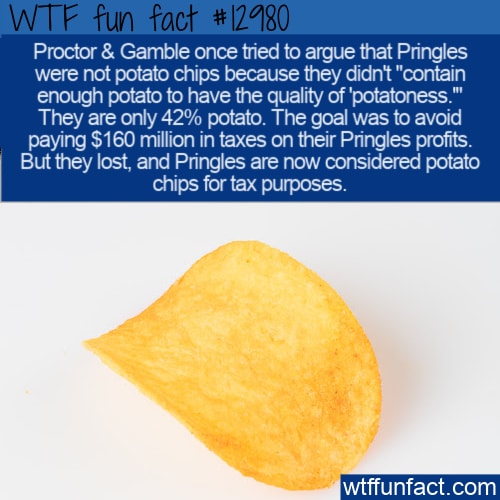 If you think a potato chip is made from thinly sliced potatos, then Pringles are not potato chips at all. However, as far as British courts are concerned, they’re made with enough potatoes to call themselves potato chips.

What’s in a name?

It took 3 court cases at three different levels drawn out between the years 2007 and 2009 to decide whether the makers of Pringles were entitled to use the phrase potato chip to identify their product. As you might imagine, it was all about money.

According to HowStuffWorks (cited below): “Here’s how this comically complicated problem started. In the mid-20th century, a tax was born by way of France and England called the value-added or VAT tax. This ‘consumption tax’ started off as a 10 percent tax on all goods bought from a business. More than 20 percent of the world’s tax revenue comes from the value-added tax making it a pretty big deal.”

Deciding if Pringles are potato chips

Ok, so what does this have to do with potato chips?

“In Britain, most foods are exempt from the value-added tax, except for potato chips or ‘similar products made from the potato, or from potato flour.’ This led to a long, arduous journey to figure out whether or not Pringles (which, by the way, were touted at one time as the “newfangled potato chip“) were actually potato chips. If they were ruled as chips, Pringles’ parent company at the time, Procter & Gamble, would be subject to a 17.5 percent VAT tax.”

As you may have noticed, many companies will go to great lengths to reduce their tax burdens. But get this…”Procter & Gamble’s initial argument was that, no, Pringles were not potato chips because they didn’t “contain enough potato to have the quality of ‘potatoness.‘”

In 2008, a lower British court agreed with P&G , but a year later, the Court of Appeal re- reversed that decision, “calling Procter & Gamble’s argument that the ingredients of a product don’t define the product ‘hogwash.'”

That overturned decision was bad news for P&G because they were now on the hook for $160 million in taxes.

Apparently, 42% of potato flour is enough to constitute potatoness for the point of British taxes. — WTF fun facts

Source: “It Took a Court to Decide Whether Pringles Are Potato Chips” — HowStuffWords