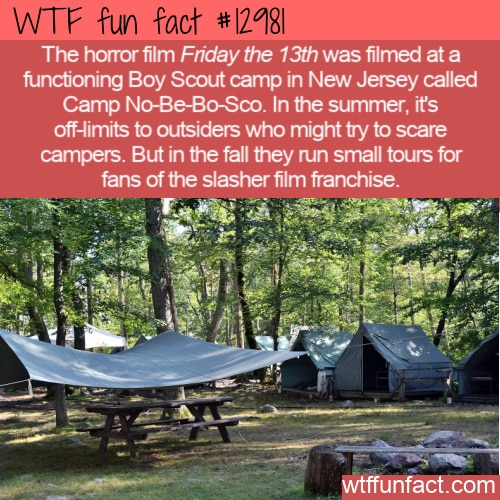 Are you a fan of 80s slasher films or Gen X nostalgia in general? Then you might want to visit the Kittatinny Mountain region in northwestern New Jersey. There, you’ll find a Boy Scout camp called Camp No-Be-Bo-Sco. It was the setting for the iconic horror film Friday the 13th.

Just make sure you don’t go in the summer because they really don’t like it when people bring up getting murdered in the woods.

For those who visit, the camp still looks much like it did in the 1980 film about a camp that reopens on Friday the 13th, 1980, decades after a drowning and two grisly murders. The boy who drowned – Jason Voorhees. And his mother is none-too-pleased.

In the film, campers return just like they do in real life each summer. At the real Camp No-Be-Bo-Sco, kids enjoy week-long retreats with swimming and games, and arts and crafts. Of course, Camp Crystal Lake was the setting of a new set of a second murderous rampage.

The Boy Scouts of America run the camp (No-Be-Bo-Sco stands for North Bergan Boy Scouts). And they’re very careful about its image and protecting campers from any unnecessary scare tactics from outsiders during the summer.

Things change in the fall.

Unaffectionately referred to by campers as “Camp Blood” in the film, those who run the camp these days know that film tours are a great way to raise money. That’s why they hand it over to a group of camp alumni in the fall. The former campers bring in Friday the 13th movie props, invite actors, etc., and run Crystal Lake Adventures. They’ve been leading tours since 2011.

According to an article in Smithsonian Magazine (cited below), whose author took a tour:

“The staff at Crystal Lake Adventures do not do media interviews or allow any commercial photography. My tour guide said events always sell out quickly, and word-of-mouth among Friday the 13th fans provides plenty of publicity.”

Sounds like the perfect way to prepare for Halloween! — WTF fun facts

Source: “The 1980 Slasher Movie ‘Friday the 13th’ Was Filmed at This Boy Scout Camp in New Jersey” — Smithsonian Magazine