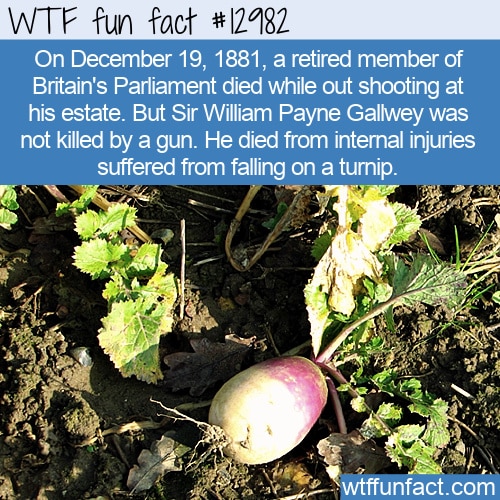 It’s even more strange since he was out on a shooting trip at his estate, Thirkleby Park. But a gun was not the cause of his death.

How does one die by turnip exactly?

The Northern Echo reported, that Gallwey “was out shooting in the parish of Bagby, and in crossing a turnip field fell with his body on to a turnip, sustaining severe internal injuries.”

He received medical aid after his fall. But already in poor health, he was unable to recover from his run-in with the turnip. He died a few days later.

Gallwey was 73, and he just retired from Parliament a year earlier.

According to Victorian Commons (cited below), “Gallwey is not the only MP whose death involved a turnip.”

A second death by turnip

In November 1833 Whig MP Lewis Fenton died after falling from a window at his home. He

“Press reports suggested that there was ‘considerable mystery’ surrounding the circumstances of his death, hinting at suicide, but the ensuing inquest returned a verdict of accidental death. As Fenton’s widow explained to the surgeon who tended him, Fenton had been in the habit of going into the attic to look at ‘a piece of ground where some turnips were growing, to see that none of his cows were trespassing in it’. He had apparently over-balanced while standing on a chair to look out of the window.”

Assuring people it was not a suicide, Victorian Commons notes that “Other evidence showed that Fenton had been in a cheerful mood the evening before his death, when he had drafted a speech for a forthcoming meeting regarding a testimonial to the anti-slave trade campaigner William Wilberforce.” — WTF fun facts