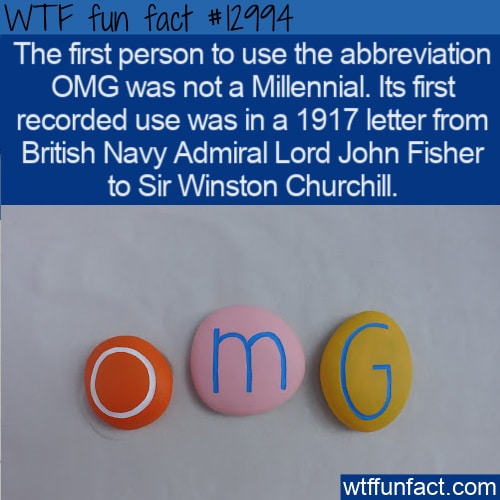 Have you typed or texted OMG in surprise? While you may feel a bit too old and mature for that, it might surprise you to know it’s not a millennial phenomenon – at least not originally. The first use of OMG to mean “oh my God” was in 1917.

Who was the first person to use OMG?

According to Smithsonian Magazine (cited below), Lord John Fisher was a British Navy Admiral “who began World War I as First Sea Lord but resigned in 1915” first used the abbreviation in a letter to none other than Prime Minister Winston Churchill.

but some Headlines in the newspapers have utterly upset me! Terrible!!
“The German Fleet to assist the Land operations in the Baltic.
“Landing the German Army South of Reval.”
We are five times stronger at Sea than our enemies and here is a small Fleet that we could gobble up in a few minutes playing the great vital Sea part of landing an Army in the enemy’s rear and probably capturing the Russian Capital by Sea!
This is “Holding the ring” with a vengeance!
Are we really incapable of a big Enterprise?
I hear that a new order of Knighthood is on the tapis: — O.M.G (Oh! My! God!)– Shower it on the Admiralty.

The first use of OMG was one of utter surprise, which seems fitting! But let’s not overlook the hilarious phrase “Shower it on the Admiralty” either – that one has to come in handy at some point, right?

Source: “The First Use of OMG Was in a 1917 Letter to Winston Churchill” — Smithsonian Magazine