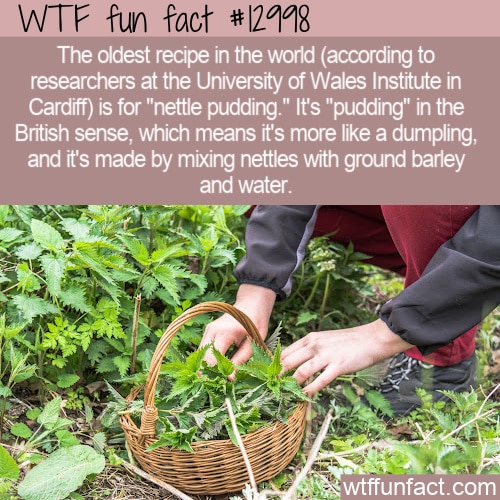 You know the oldest recipe in the world was going to be for something kind of weird, right? Well, at the very least, it’s a pudding with a kick. The world’s oldest recipe is roughly 8,000 years old and contains instructions for making nettle pudding.

The oldest recipe in the world is for…pudding

Researchers at the University of Wales Institute (Uwic) in Cardiff, led by Dr. Ruth Fairchild, have been studying ancient recipes for years. In fact, they’ve managed to translate the into something you really can cook (though there’s no promise of whether it’ll be palatable or even remotely worthwhile).

If you’re thinking nettle pudding sounds like a bad idea, we’re with you. People have long used nettles in medicines. But there’s a reason we refer to them as “stinging nettles” – they sting!

However, Fairchild assures adventurous cooks that heating up the nettles “takes the sting right out of them. ” Fingers crossed!

In 2007, Dr. Fairchild told BBC Breakfast (cited below) “nettle pudding was made by mixing nettles with ground-down barley and water.” And, here, Americans will note that “pudding” means something completely different to the British.

“For those of you not familiar with non-dessert puddings, it has the consistency of a dumpling and is often eaten with chunks of bread and the meat it is cooked along side.”

What is nettle pudding?

You may recognize some ingredients in nettle pudding (which is not the gloppy, smooth stuff we eat in America). It includes sorrel, watercress, dandelions, and nettles…you know, weeds.

Antiquity Now also assured readers that “the stinging nettle has long been an important food source and was greatly appreciated by ancient cultures. Its use as food has always been closely tied to its medicinal value. Often it would be ingested during the spring because it was believed to help in circulation and could restore warmth to the body after the cold winter months. Generally, the younger plants were chosen for food because they are less bitter, but more mature leaves can be boiled until they are suitable for ingestion. The Romans boiled nettles along with meat in order to tenderize it. Europeans used it in soups and puddings like the one below. In fact, in 2007, the recipe below was named Britain’s oldest recipe and is believed to be from around 6,000 BCE.”

We had no idea – we had always assumed that giving something a name like “stinging nettle” was a cue not to put it in your mouth under any circumstances.

Interested in trying the oldest recipe in the world?

Chop the herbs finely and mix in the barley flour and salt.
Add enough water to bind it together and place in the center of a linen or muslin cloth.

Tie the cloth securely and add to a pot of simmering venison or wild boar (a pork joint will do just as well). Make sure the string is long enough to pull the pudding from the pot.
Cook the pudding until the meat is done (at least two hours).
Leave the pudding to cool slightly, remove the muslin, then cut the pudding into thick slices with a knife.
Serve the pudding with chunks of barley bread.

Source: “When nettles were dish of the day” — BBC