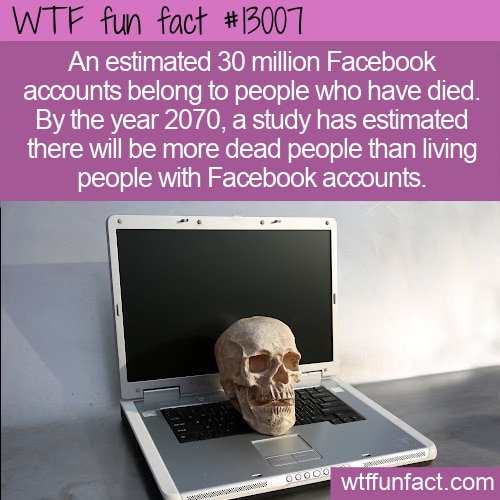 Studies estimate that somewhere between 10 million and 30 million Facebook accounts belong to users who have died. Facebook can memorialize accounts if they’re notified of a death, but most people don’t think to plan for the legacy of their social media accounts. According to PopCrush, “a Good Trust survey revealed ‘some 90 percent of people here in the U.S. have no plans whatsoever” as to “what happens to the digital stuff’ after they die.”

Of course, Facebook is notoriously private about user data, so there’s no way to confirm the exact numbers.

According to The Guardian (cited below), “If Facebook continues to grow at its current rate, the site could have 4.9 billion deceased members by 2100…” This was estimated by Oxford University researchers.

“Even if growth had stopped entirely last year, the study finds, Facebook would be looking at about 1.4 billion dead members by 2100. By 2070, in that scenario, the dead would already outnumber the living.”

You may not think it’s a big deal if a social media user is dead, but questions arise about who owns the data they’ve posted. This is especially thorny if they’ve posted something in the past that family or friends come to consider private.

The question is: who is entitled to your digital legacy?

If you haven’t left a trusted person with your passwords in the event of your death, is there anything on your social media pages that could become problematic in the future? (This might be a big problem if, for example, you spend a lot of time posting about your kids.)— WTF fun facts