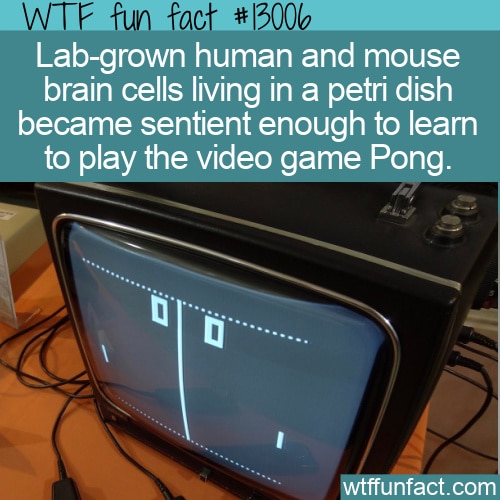 In news that we don’t find even remotely comforting, brain cells grown in a petri dish have been shown to become sentient enough to learn to play video games. And we’re not kidding when we say that their next plan is to get the brain cells drunk and see what happens.

Not only have the cells learned to play the game Pong, but they keep improving. “They played longer rallies and were aced less often,” reported The Guardian (cited below). Of course, Pong is a very simple game, which is why the researchers chose it in the first place.

The study that revealed the experiment was just published in the journal Neuron.

The researchers hail from Cortical Labs, Monash University, the University of Melbourne, and University College London.

How can brain cells learn to play Pong?

According to The Guardian, the researchers out the cells on something called the “DishBrain,” “a multi-electrode array that can sense cell activity and stimulate the cells, then gave the cells feedback on whether the paddle was hitting the ball.”

Within five minutes the cells started to communicate using electrical activity to operate the game. It sounds like sci-fi, but it’s true.

“Now the researchers will see how the cells perform when they are drunk or given medicines. They hope to use the DishBrain to learn more about conditions such as epilepsy and dementia.”

“This is the new way to think about what a neuron is,” a researcher said. — WTF fun facts