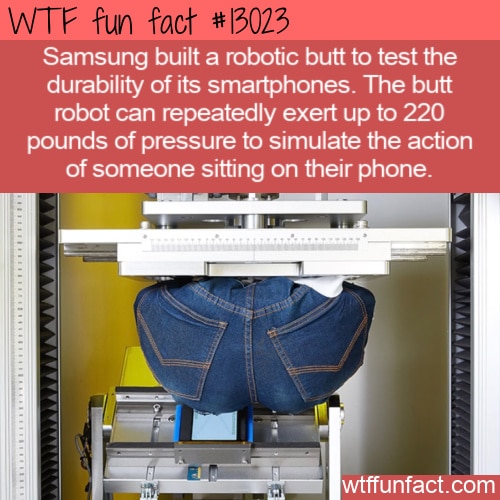 Putting your phone in your back pocket is dangerous business (at least for the phone). So to ensure their materials were sturdy enough to withstand the crush, Samsung invented a robotic butt. The Samsung butt robot exerts 220 pounds of pressure on their phones during testing.

How Samsung phones are robot butt-tested

Clad in a pair of blue jeans, the butt repeatedly sits on phone to see how they’ll react to the common real-world beating their bound to take.

According to Tech Radar (cited below), whose writer was invited to tour the facility;

“On a recent trip to Korea, we were invited by Samsung to take a tour of its dedicated testing facility, and as we made our way through the company’s labs (each more diabolical than the last) we came to understand just how seriously the company takes its quality control – even if one of these tests does involve an undeniably quirky robot butt (dressed in blue denim jeans, no less) repeatedly sitting on handsets.”

The facility did a number of quality tests on their phones. They tested durability, sound quality, and battery power, among other important functions.

While we’re sure the phones still break from time to time, they have been through a lot. Tech Radar also reported:

“Using a number of different mechanical devices that look like the world’s most brutal skill testers (including auto drop testers, tumble testers and continuous free fall testers), Samsung’s handsets are repeatedly dropped from varying heights and angles onto a variety of hard surfaces, such as metal and marble.”

The butt test is still our favorite and when the first tech writers got a chance to see it around 2014, the company was met with so much public interest that they finally released a video so people could see it for themselves. Enjoy! — WTF fun facts