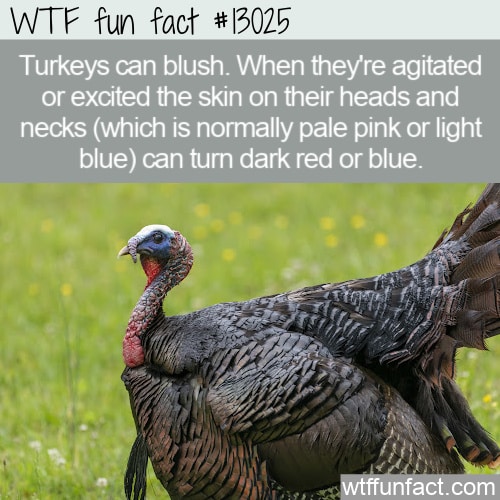 You may be able to tell when a turkey is embarrassed (or sick or scared or otherwise agitated). That’s because their skin can change color. In other words, turkeys can blush.

How do turkeys blush?

According to Live Science (cited below):

“When a turkey becomes frightened, agitated, excited or ill, the exposed skin on its head and neck can change from its usual pale pink or bluish-gray color to red, white, or blue. And during mating season, the male turkey’s wattle turns scarlet to reflect his elevated sex hormone levels. The fleshy flap of skin that hangs over the gobbler’s beak is called a snood and also turns bright red when the bird is excited.”

You’d probably have to pay pretty close attention to notice the difference, but you could always try telling a bawdy joke to the next turkey you see to test it out.

While many of us only think of turkeys around Thanksgiving, there’s a lot more to them that makes them fascinating creatures. For example:

Did you know any of these fun facts about turkeys? — WTF fun facts