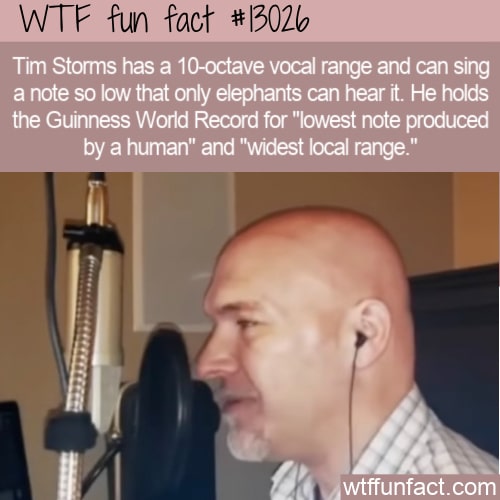 A man named Tim Storms holds the record for the lowest vocal note a living human is capable of singing. He’s had the record since 2012.

What is the lowest vocal note?

According to Classic FM (cited below), he “holds the Guinness World Records for both the ‘lowest note produced by a human’ and the ‘widest local range.'”

An international competition from Decca Records called “Bass Hunter” was searching for a bass singer who could sing a low “E” – an exceptionally hard and deep note. The goal was to find someone who could since composer Paul Mealor’s newest composition called De Profundis, which featured the note. The low E is the lowest tone ever written in a piece of classical music).

Classical FM notes (no pun intended) that “Storms submitted his tape and won the competition by a landslide. The singer and composer could not only get down to a low E but, so he says, two octaves lower than that.”

G-7 is so low that it’s difficult for human ears to process. But Storms’ lowest note is pretty much imperceptible to human ears. However, elephants can hear it just fine!

According to the Guinness World Records re: the record-setting note:

Storms “is the bass singer for the vocal group ‘Pierce Arrow’. The attempt was witnessed by two college music professors and an acoustician. The frequency output of Timothy’s voice was measured using Bruel & Kjaer equipment (low frequency microphone, precision sound analyser and laptop for post analysis).”

Storms has a vocal range of 10 octaves.

No doubt you’d like to hear it all, so check out the video below. (And grab an elephant if you want to be sure of what you’re hearing.) — WTF fun facts

Source: “Listen to the man who holds the record for lowest vocal note sung by a human” — Classic FM