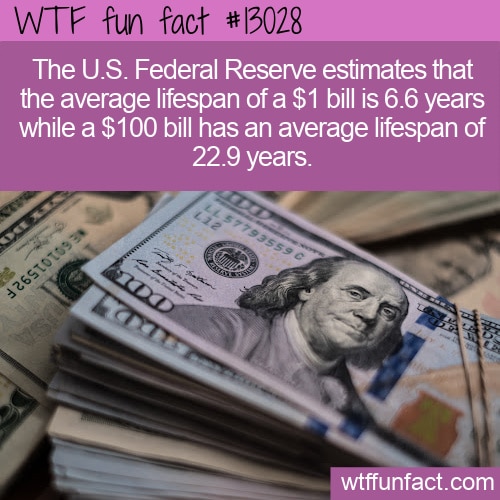 The lifespan of paper bills

“When currency is deposited with a Federal Reserve Bank, the quality of each note is evaluated by sophisticated processing equipment. Notes that meet our strict quality criteria–that is, that are still in good condition–continue to circulate, while those that do not are taken out of circulation and destroyed. This process determines the lifespan of a Federal Reserve note.”

The Federal Reserve puts new currency into circulation each day and reclaims damaged money to destroy it. The cash is typically handed over by banks.

Every year, around $200 billion of “unfit currency” gets taken out of circulation.

According to Yahoo Finance: “What makes money too unfit to use? According the Fed, bills that have holes larger than 19 millimeters, or about the size of an aspirin, can no longer be used. Bills that are torn, dirty, or worn out are also removed. And 5-, 10- and 20-dollar bills produced before 1996 are removed automatically because of their age, regardless of condition.” — WTF fun facts

Source: “How long is the lifespan of U.S. paper money?” — U.S. Federal Reserve