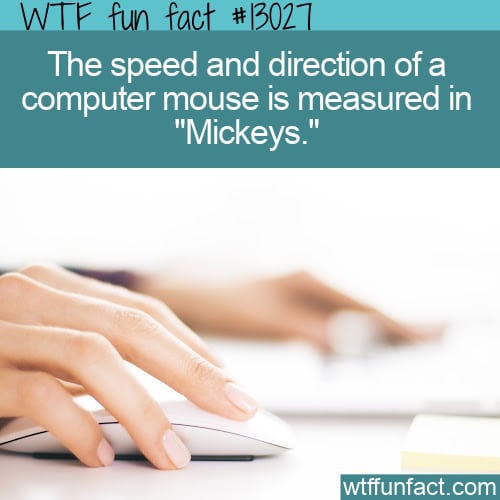 A good computer mouse will move across pixels quickly and without requiring too many clicks of the bottom wheel (or centimeters across the mouse pad if you’re using a mouse with a sensor). The unit of measurement used for a computer mouse is called a Mickey. The devices may be measured in Mickeys per second or Mickeys per centimeter, for example.

Mickeys are also used to measure the horizontal, vertical, and diagonal speed at which a cursor can travel over pixels on a computer screen.

Presumably, this unit of measurement is a cute way to summon to mind the Disney character Mickey Mouse. However, Disney has a tight hold on the copyright for their creations, so you won’t see a deliberate reference to the Mouse himself on your equipment.

Other quirky units of measurement

According to Mental Floss (cited below), a Mickey isn’t the only unofficial unit of measurement with personality.

For example: “If a light-year is the distance traveled by light in one year (i.e. approximately 6 trillion miles), then a beard-second is the length that a beard hair grows in one second—or, according to Google’s unit converter, 5 nanometers.”

And “One sydharb is equivalent to 500,000,000,000 liters, namely the approximate volume of Sydney Harbor.” But why is this useful? “Well, just like using the relative sizes of countries or regions to compare one against another (as in “Brazil is the same size as five Alaskas”), the volume of Sydney Harbor can be used to give context to otherwise incomprehensibly vast quantities like the annual water consumption of a city or country, the size or impact of a flood, and the capacities of lakes and dams.  In comparison, it takes two full days (49 hours to be precise) for 1 sydharb of water to flow over Niagara Falls.” — WTF fun facts